You are here: Home / Uncategorized / Kalesa 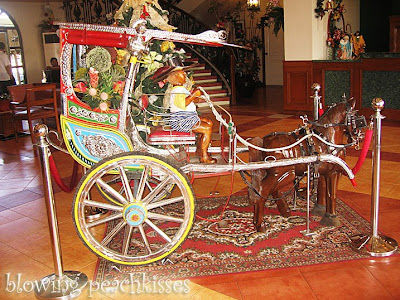 For Ruby Tuesday today,I’d like to present something really Pinoy (Filipino).The Kalesa.

A kalesa (sometimes called a karitela) is a horse-driven calash (carriage) used in the Philippines. The word, also spelled calesa, predates the Spanish conquest and descends ultimately from an Old Church Slavonic word meaning “wheels.” This was one of the modes of transportation introduced in the Philippines in the 18th century by the Spaniards that only nobles and high ranked officials could afford. They are rarely used in the streets nowadays except in tourist spots and some rural areas.

A kalesa looks like an inclined cart. It has two round wheels on each side and two rows of seats that can accommodate four persons. The driver sits on a block of wood located at the front of the cart near the horse. (source: Wikipedia)