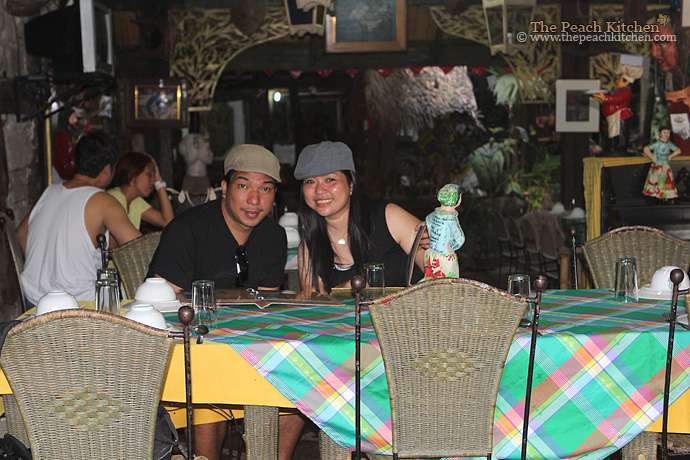 It took days before I was able to save enough courage and  readied myself to eat Nilasing na Palaka {frogs cooked in wine} the moment we arrived at Balaw Balaw Specialty Restaurant in Angono, Rizal. It’s something I don’t usually eat in a normal basis because I find frogs to be icky creatures that are  best suited roaming in your garden and not on your plate.

But that day, was different. We were staying at the Thunderbird Resorts for two days and heck, what was considered the “Arts Capital of the Philippines” was within the vicinity.

I didn’t know if I was going to be happy or disappointed when I was told that the frogs were not available at that time. They probably turned into princes already to avoid the frying pan. 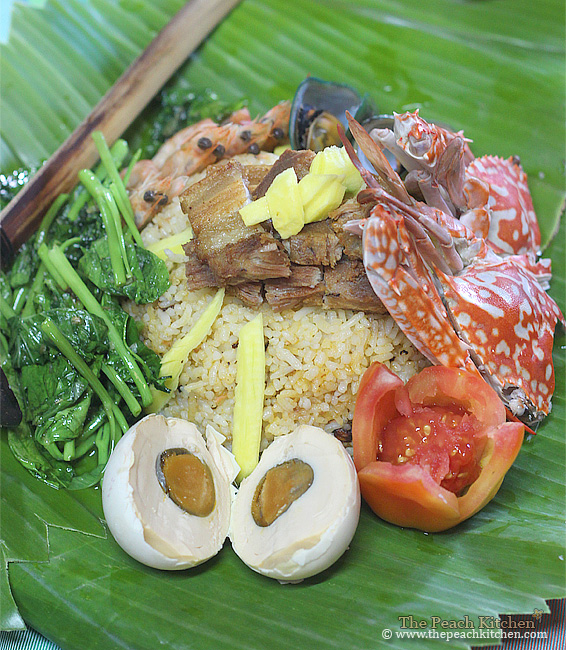 More so, almost all of the best selling exotic food that they offer aren’t available like the  Uok {wood grubs cooked as adobo or steamed with tamarind}, Kamaru {crickets}, Soup No. 5 (soup with butt and balls of cow), Sinabawang Balot (duck embryos cooked in soup), Rose Petal Salad and Bougainvillea Flower Salad.

We had to settle with the somewhat traditional but equally festive and satisfying dishes one the menu. First up is one serving of Minaluto with Yellow Rice {₱280}. It is such a colorful dish served on a plate of banana leaves and consisting of yellow rice, steamed crab, shrimp, mussels, fried pork, water spinach, strips of green mango, salted egg and tomato.

It seems to me that dish reflects the art and the organized chaos that the restaurant seems to have. 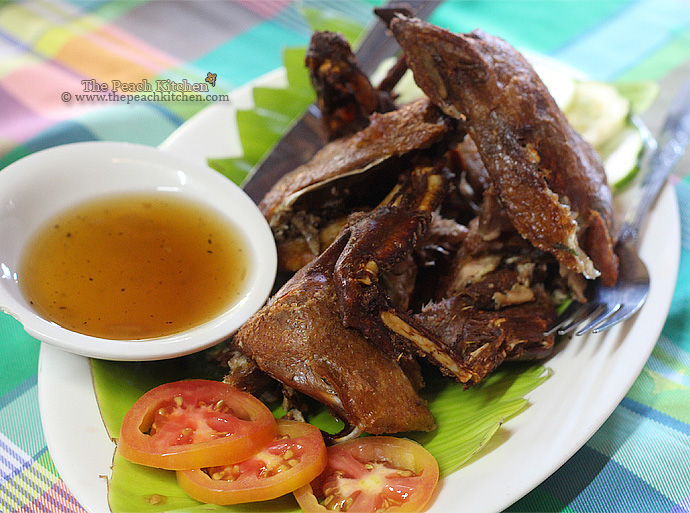 The Fried Itik {native duck}was a welcome change instead of the usual chicken. And the kids ate heartily thinking it was their usual favorite. What was served seemed like a thin itik, though, because it’s more bones than meat. {Or is that how it’s really supposed to be?} 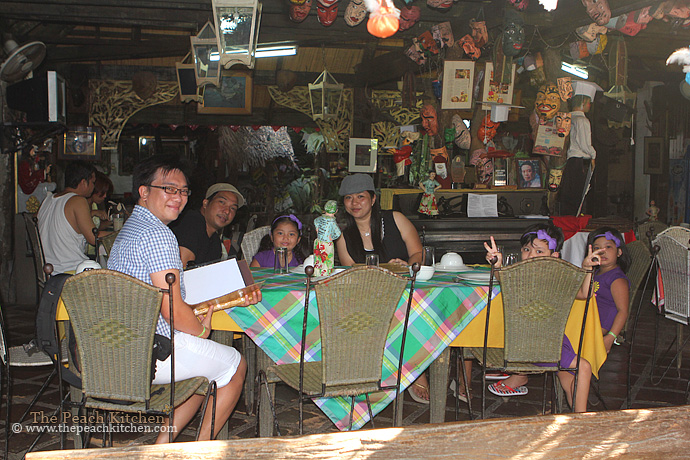 The restaurant-slash-art-gallery-slash-museum is nothing short of fascinating. Works of arts rich in Filipino culture and traditions are abound. 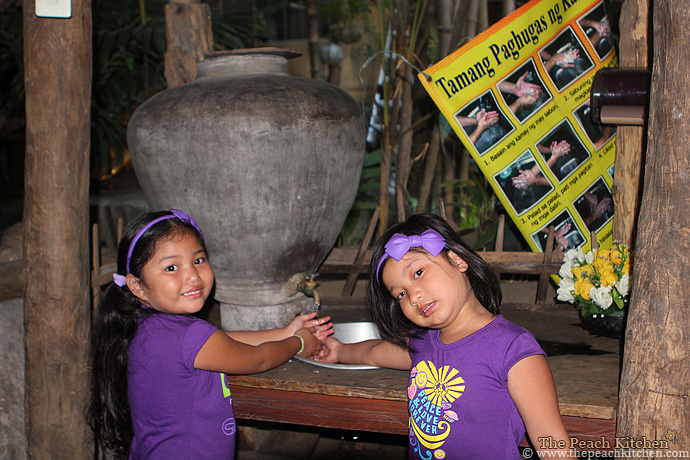 Even the faucet and the sink is made up an old tapayan! 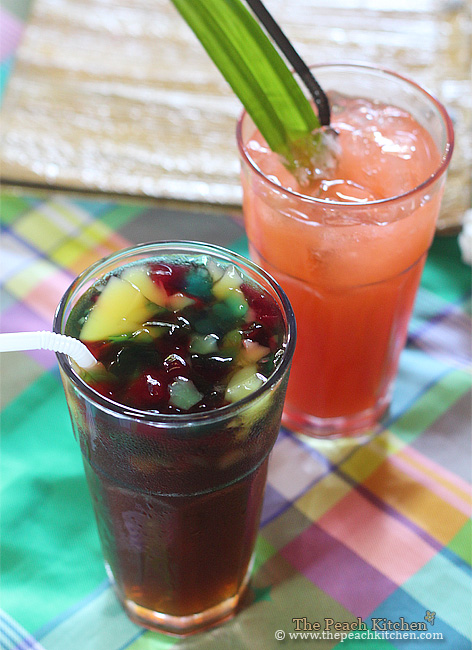 We just had to order the Gayuma {Aphrodisiac Drink} {₱65} even though we knew that coconut milk mixed with Pandan Juice and grenadine syrup will do nothing for our libidos…hee. The Sago and Gulaman was a refreshing drink for peanutbutter♥  all because it was something he couldn’t order back in Dubai.

OTHER DISHES WE ORDERED 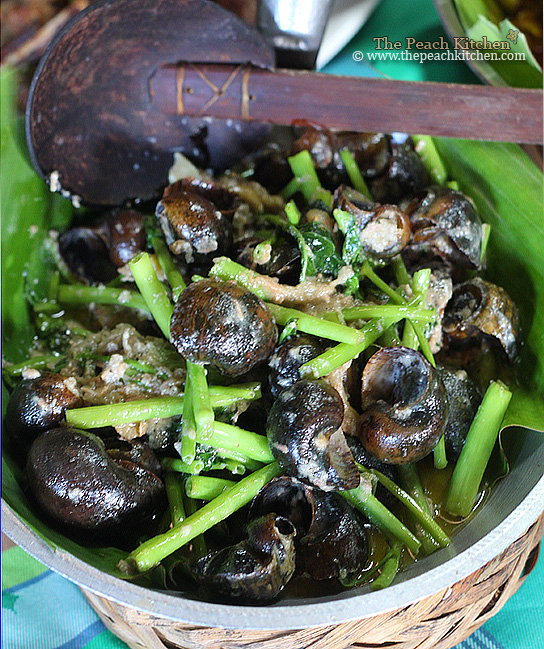 Ginataang Kuhol {freshwater snails cooked in coconut milk}{₱140}  is really something we have to have whenever available.  We love picking and slurping them from the shells. 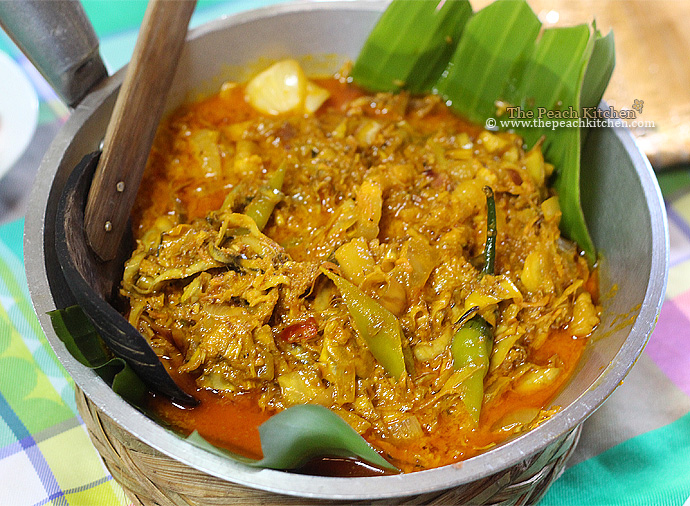 Kinilaw na Puso ng Saging {₱220} is supposed to be banana heart that is marinated in vinegar and pork but what came out looks like something sautéed. Nobody complained because there is no need to — it was delicious. 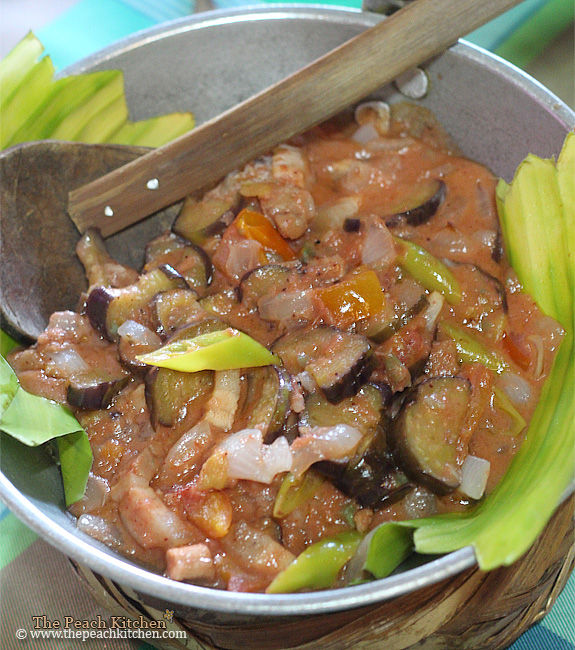 Balaw Balaw, the name of the restaurant, is really taken from a specialty dish with the same name but is also called Binurong Hipon, shrimp paste that was made to ferment along with rice and angkak.

This is something that we have to try specially since my sister is crazy with Burong Isda — Balaw-Balaw sa Baboy at Talong {₱170}. Balaw-Balaw stewed with pork and eggplant. 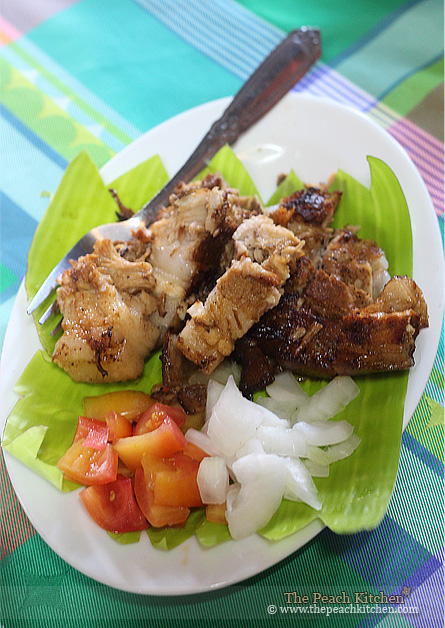 Of course, the kids need to be in their familiar taste territory so we they had Grilled Pork Belly along with the Fried Itik. 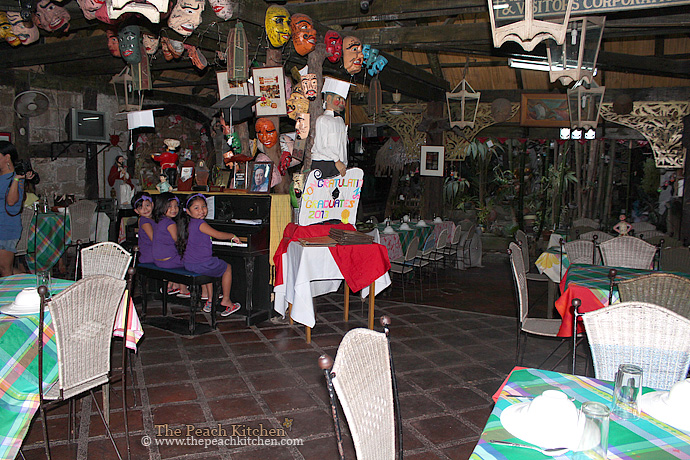 There is an old piano in the middle of the restaurant which the kids proceeded to play with the moment we arrived. They probably think it was so cool. 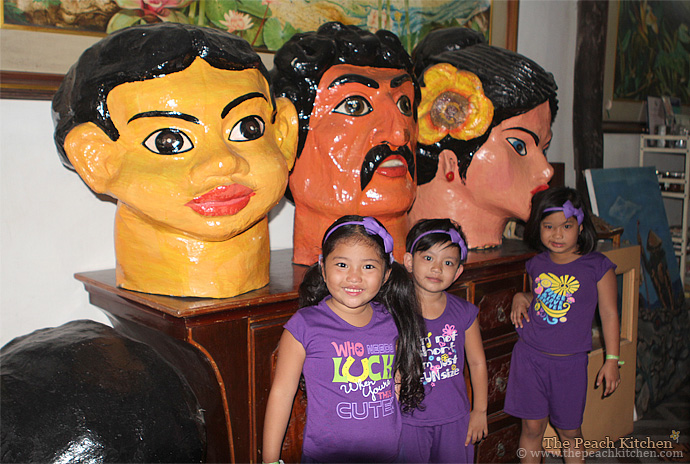 You can tell what festival this town is known for just by looking at the paper maches and sculptures that make up the first floor. Yup, Angono is known for the “Higantes Festival” (also known as the feast of San Clemente, celebrated every November 23). 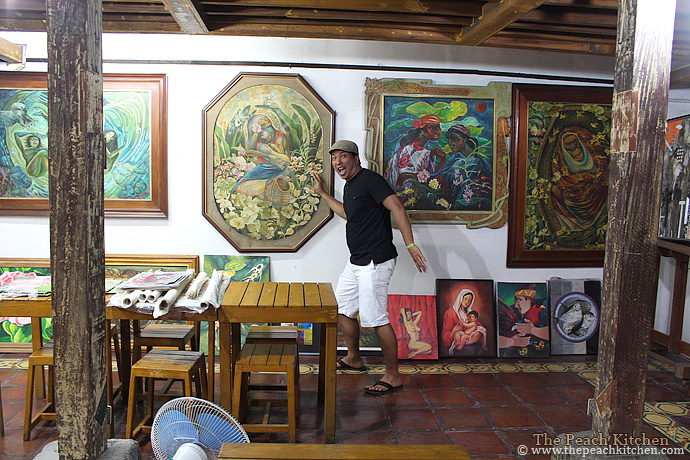 At the far end of the first floor lies an Art Gallery, highlighting the works of the late owner and some of the towns local artists. The artworks is mostly about Filipino culture, traditions and folklores. I was impressed by the paintings about Kapres, Duwendes, Fairies and Tikbalang. While peanutbutter♥‘s eyes caught the paintings that depicts labor and passion. 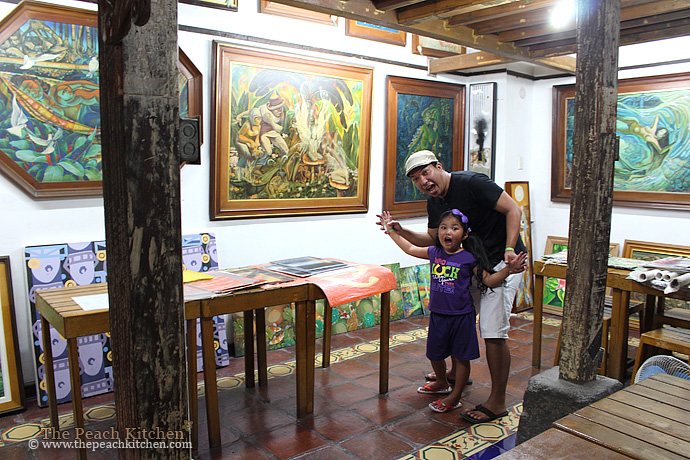 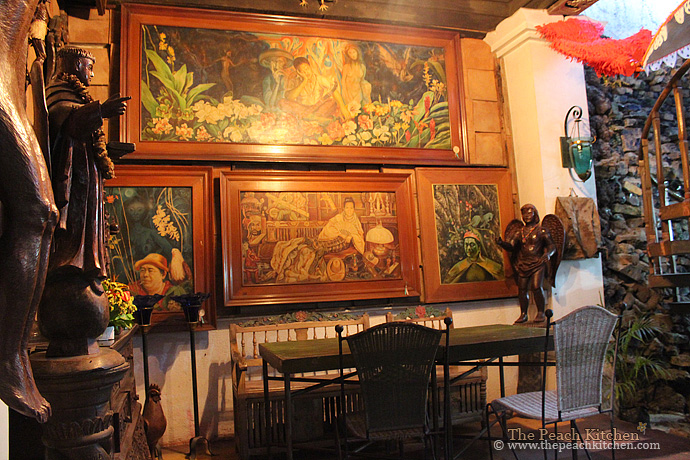 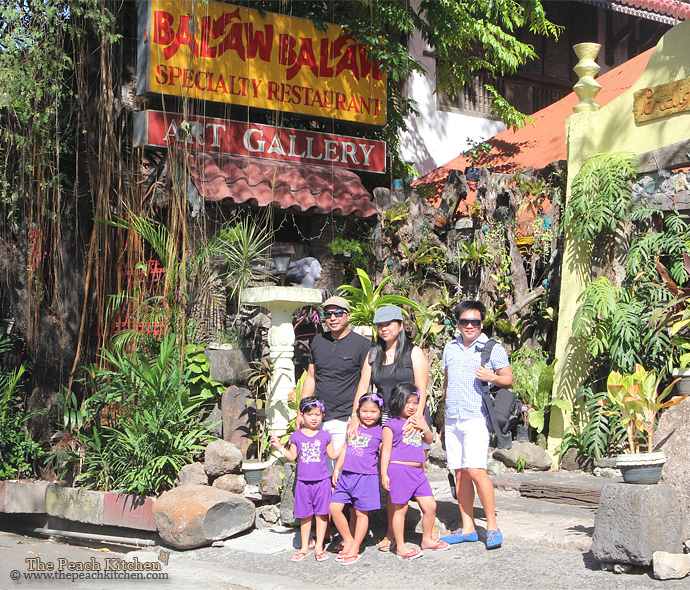