You are here: Home / pastry / Cinnabon 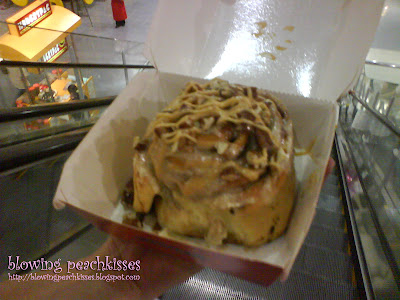 Caramel Pecanbon
I am an Applebon fan but it’s not in season.This is so so yummy,I can even eat the extra frosting as it is.
Cinnamon rolls are one of my favorite pastries.
A cinnamon roll(also cinnamon buns and cinnamon swirls) is a sweet pastry found commonly in North America and Northern Europe. The cinnamon roll is thought to have been invented in Sweden where it takes the name kanelbulle (literally: “cinnamon bun”). It consists of a rolled sheet of yeast dough onto which a cinnamon and sugar mixture (and raisins in some cases) is sprinkled over a thin coat of butter. The dough is then rolled, cut into individual portions, and baked. Cinnamon rolls are frequently topped with icing or glaze of some sort, or (most common in northern Europe) nib sugar.