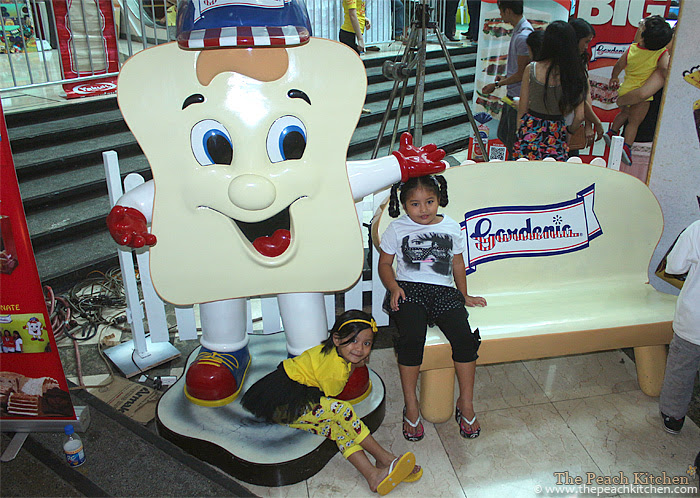 After voting for the Barangay Elections last monday, Sis, my daughter Ykaie, my niece Cyvrine and I went to the Gardenia Happy Bread Day 2013 event.

Happy Bread Day 2013 is Gardenia’s one-day event which took place at Glorietta Activity Center, from 10am to 9pm. It is launched in commemoration of World Bread Month and is Gardenia’s biggest event of the year. The event was hosted by Regine Tolentino, Mios and Kent.

I’ve already told my daughter the night before that we were going to the Gardenia Happy Bread Day 2013 event so she’s very excited about it come Monday morning. 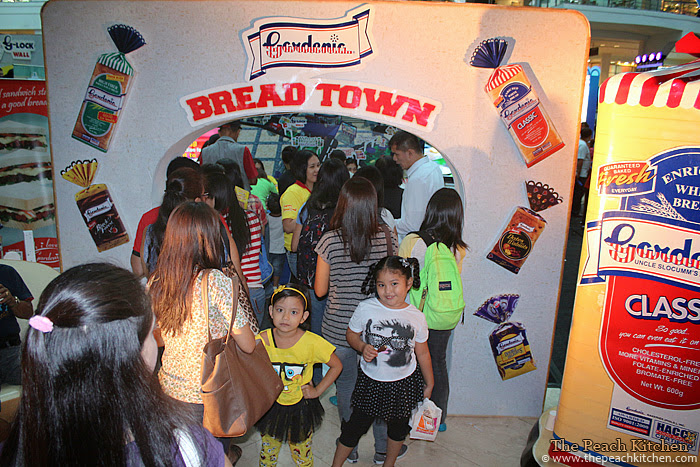 Thank God that it was a holiday and going to Glorietta was a breeze. We arrived at the event a little after noon and just as expected, there were already a lot of people lined-up at the entrance. More people were already inside the Gardenia Bread Town.

Entrance is free, all we had to do was register and sign a waiver. After registration, they gave me a Gardenia Bread Town Passport which became my guide on the different booths inside the little town.

You have to get your passport punched at every booth you visit, you’ll get a prize when you’ve visited all of the booths. 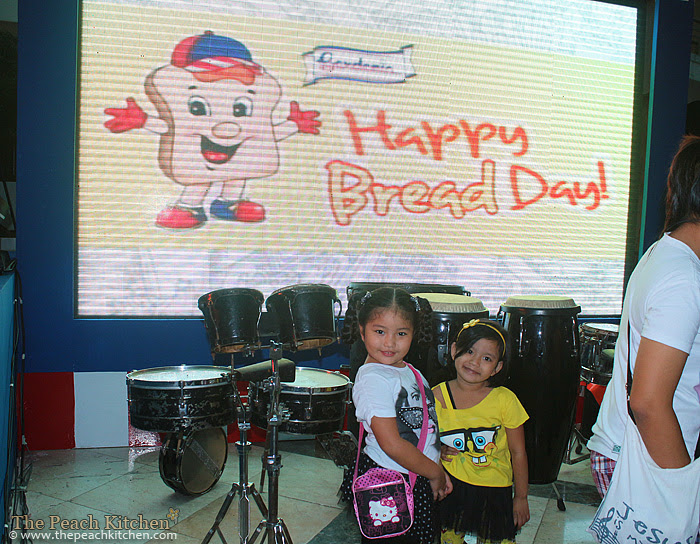 It was a bit overwhelming because there were lots of people at the event! The activity center was indeed turned into a small wondrous place with lots of activities, prizes, and of course, overflowing Gardenia breads to explore! 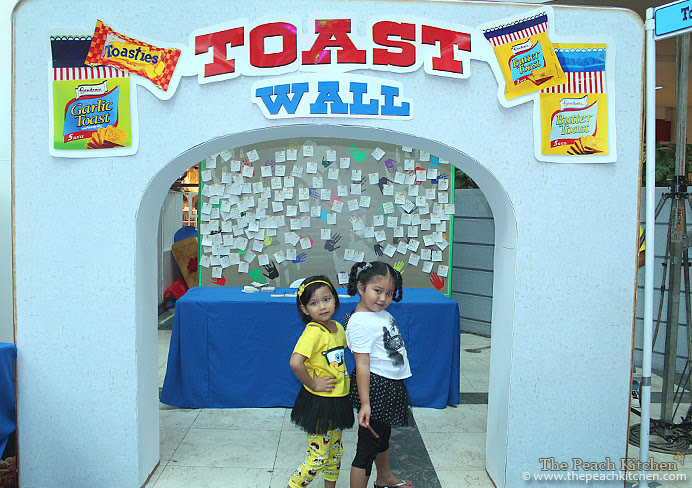 Our first stop was the Toast Wall. Here, you can write a message to Gardenia on a small notepad in the shape of a toast and stick it on a big wall. 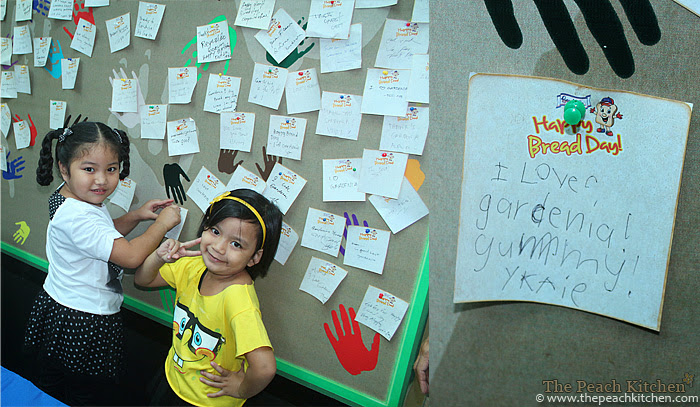 Ykaie wrote a message that says: “I love gardenia! Yummy! – Ykaie” then pinned it to the Toast Wall.

We got our first punch on our passport. 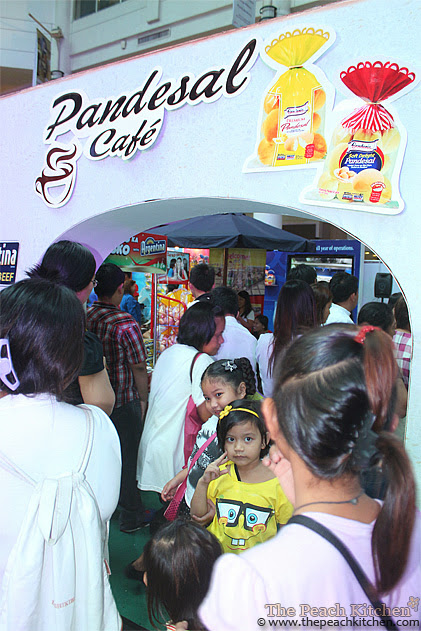 Gardenia’s booth for their pandesals is called Pandesal Cafe. I’m guessing this is the “breakfast” booth because everything in this booth reminds me of the first meal of the day. There were coffee samplings and pandesals with some of your favorite palamans (filling) like Argentina Corned Beef and Swift. 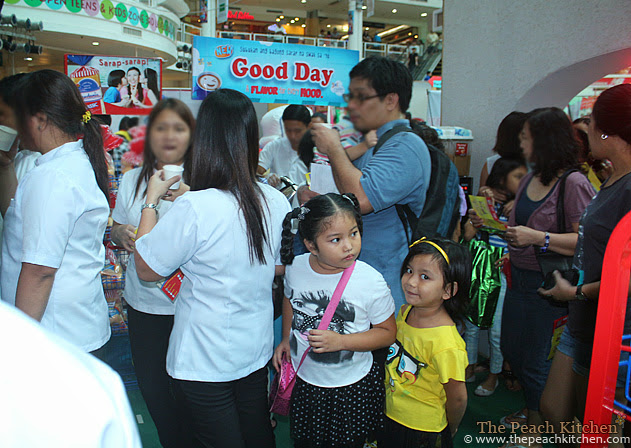 My little foodie of a daughter, Ykaie loves all kinds of sampling and “free tastes”. This event is like heaven to her and she is more than willing to line up for each one! 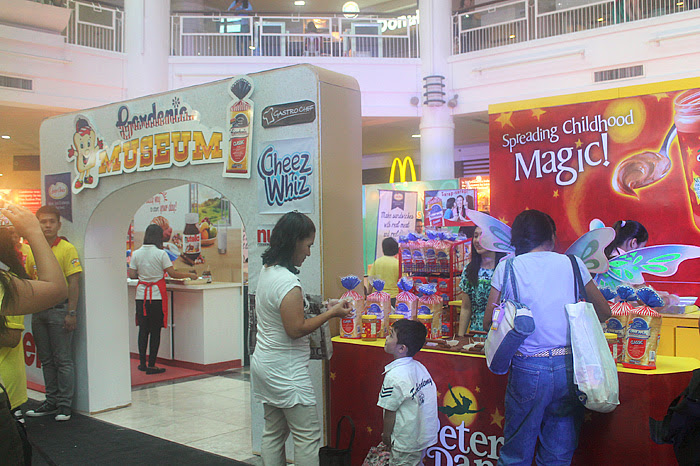 I think this is my favorite booth because this booth has samplings of Gardenia Classic Bread with my favorite fillings…. 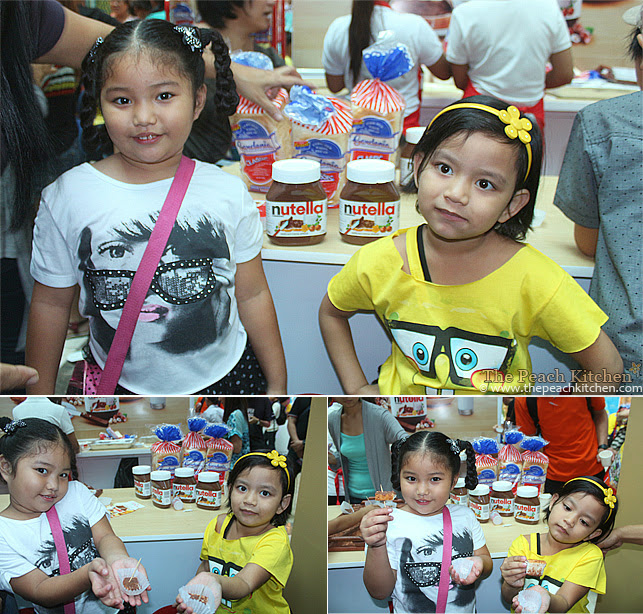 Ykaie, Cyvrine, and I enjoyed free samplings of Nutella… 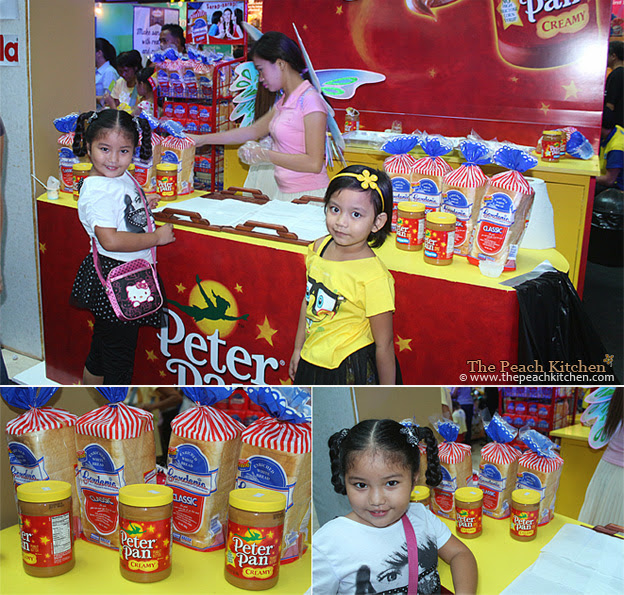 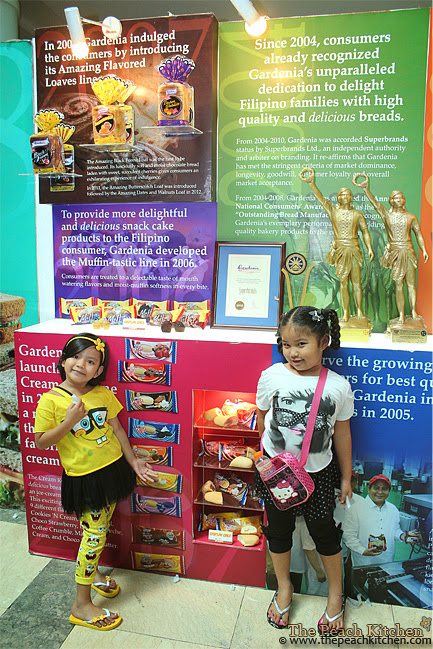 Aside from slices of Gardenia Classic Bread with different fillings, you can also see some exhibits inside the Gardenia Museum Booths. You can find out about the history of some products like the Gardenia Flavored Breads and the Muffintastic Gardenia Muffins. Trophies and awards were also displayed throughout the area. 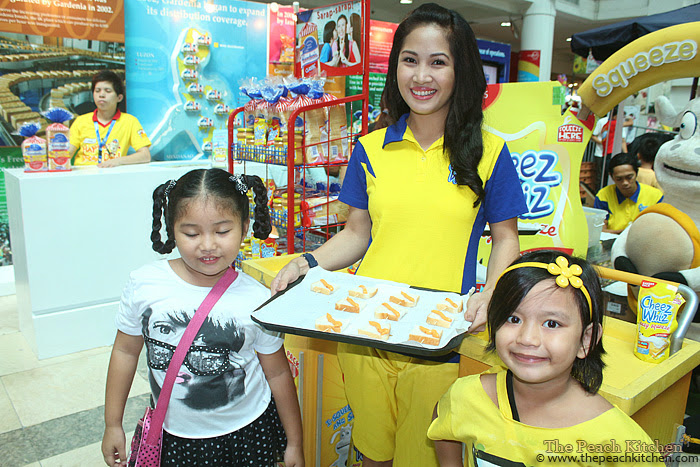 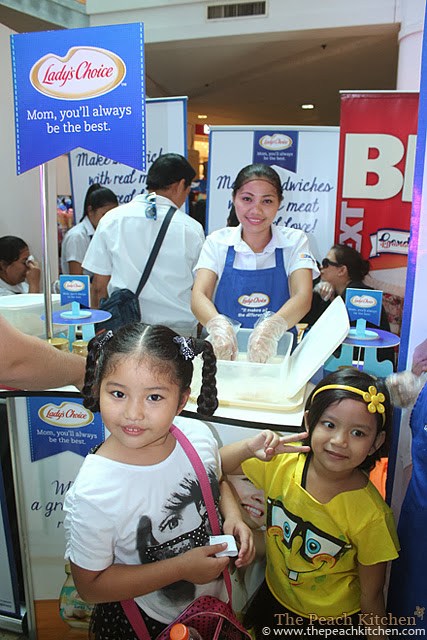 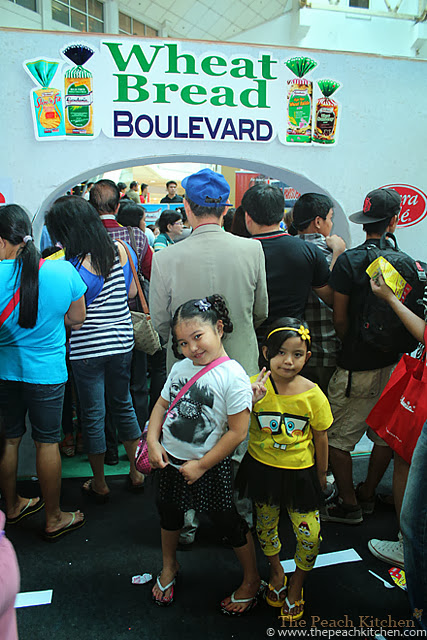 It took us a bit of time going in at Wheat Bread Boulevard. Here, they gave out samplings of Gardenia Wheat Bread with Century Tuna and Nissin Yakisoba.I wasn’t able to take a photo inside because there were a lot of people. 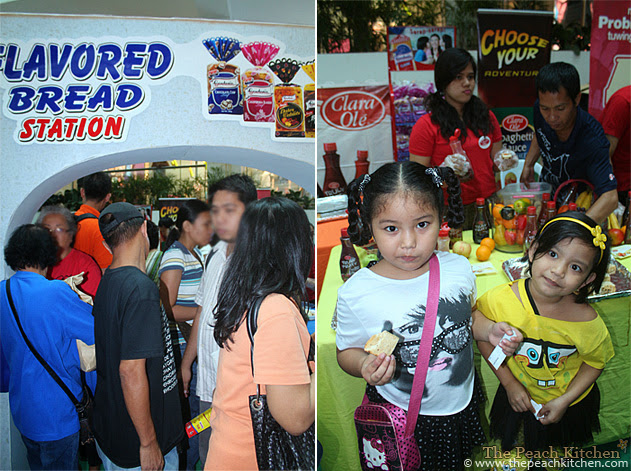 The Flavored Bread booth is like the “dessert booth”. They gave out samplings of Gardenia Flavored Bread Line like the Chocolate Chip Loaf, California Raisins Loaf, and Dates and Walnut Loaf among others… 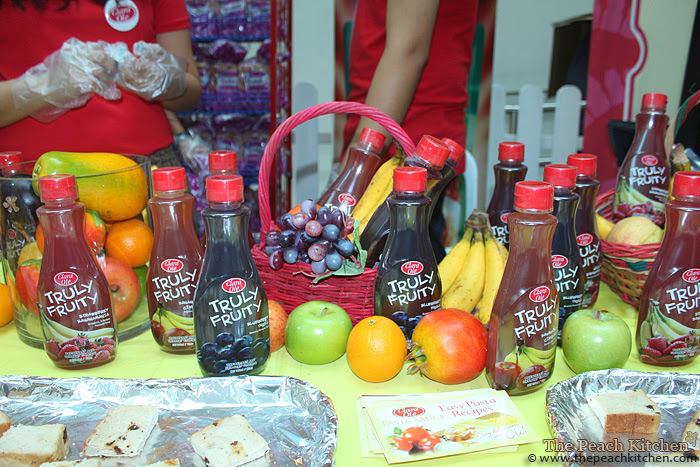 These breads were made sweeter and more delicious drizzled with Clara Ole Truly Fruity syrups. Some of the flavor combinations were: 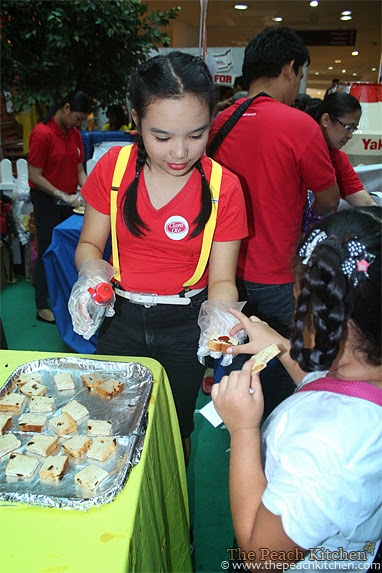 Here’s Ykaie, getting a piece of bread….Notice she also has a bread on the other hand..LOL! 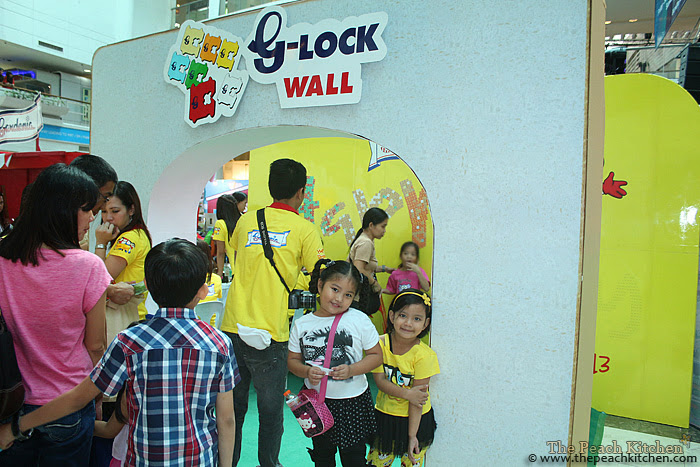 We donated some G-Lock at the G-Lock Wall so we can help 2 charities and earthquake victims. One G-Lock contributed is equivalent to three loaves of bread. 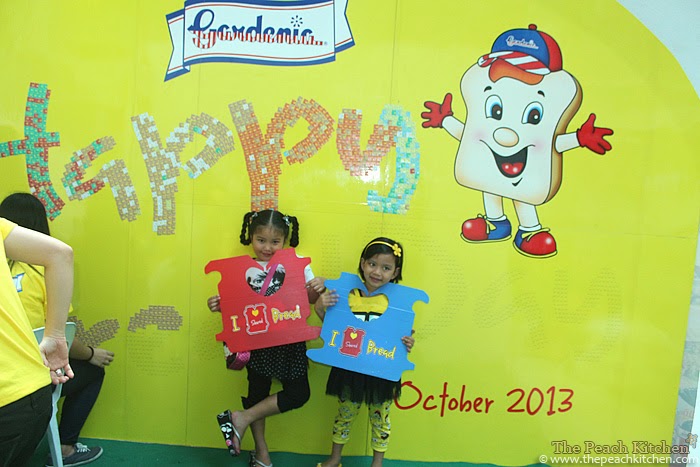 Can you imagine the giant loaf of Gardenia Bread that goes with these giant G-Locks??

The Next Big Sandwich Hit 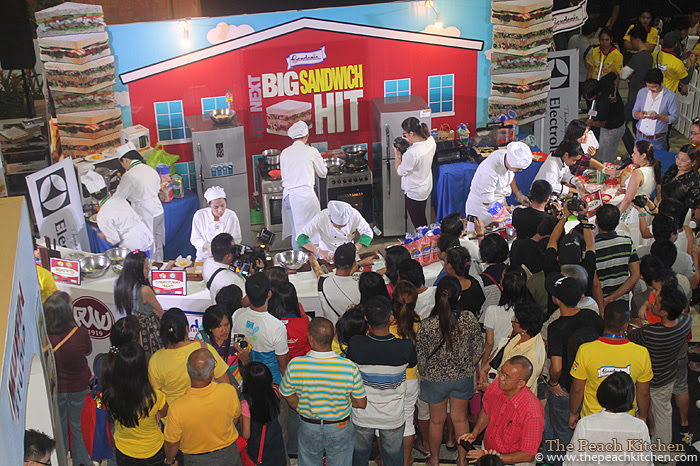 Later in the afternoon was the highlight of the event – The Next Big Sandwich Hit, an inter-school business idea and sandwich-making contest. 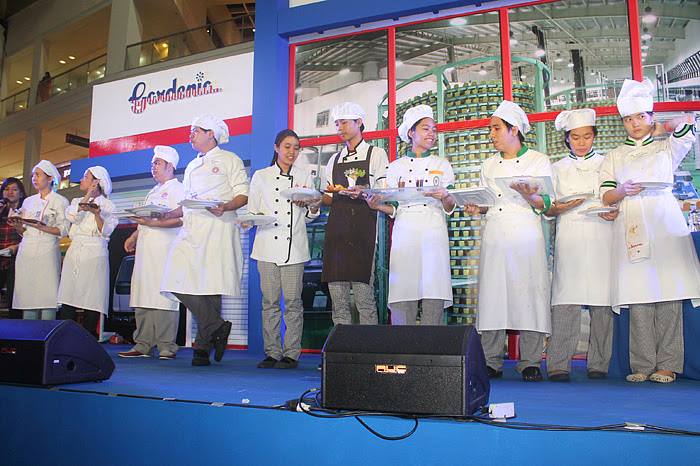 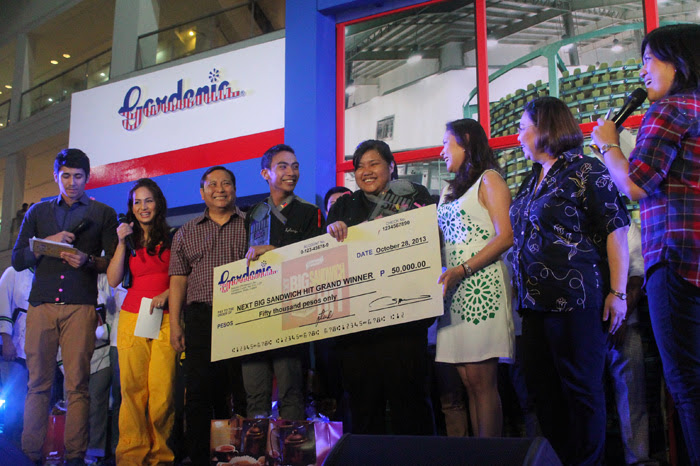 The Winners from the 10 teams are:

And Their Next Big Sandwich Hit winning recipes are:

Check out the Video of Team Fat Thin making their winning sandwich:

I wasn’t able to take a photo of the winning sandwiches but I caught these two yummy sandwich creations during the event: 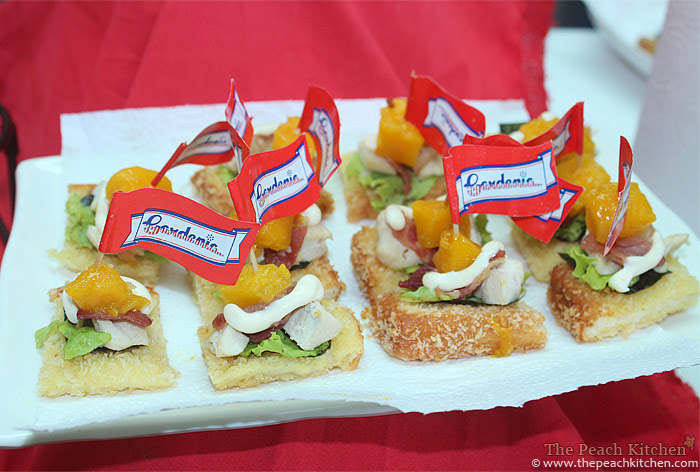 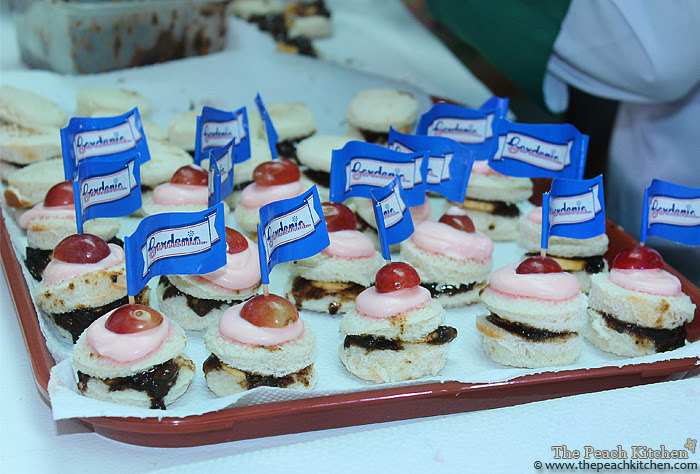 They look delicious too but if you want to find out what The Next Big Sandwich Hit winning recipes are, you can check out www.gardenia.com.ph.

Ykaie , Cyvrine, Sis, and I had a blast tasting all those filling and flavor combinations and of course, the different Gardenia Bread variants.

Were you there at the Gardenia Happy Bread Day 2013 too? How was your experience? 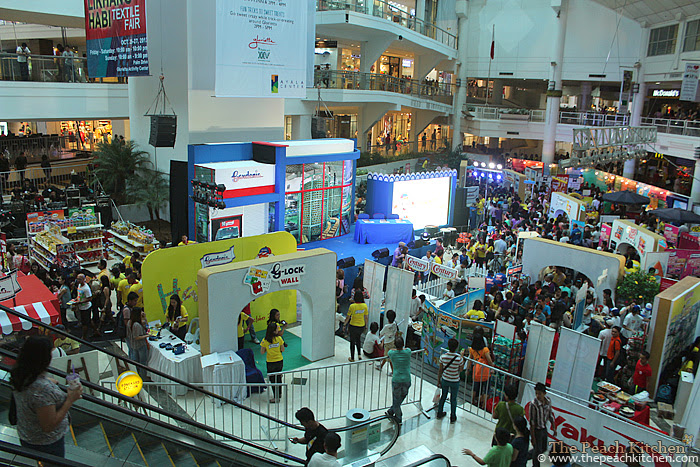 I took a photo of Gardenia Bread Town from the second floor. Look at all those people who went to the event. It’s nice when you’re updated on events like these.

So if you want to be updated on Gardenia’s upcoming promos and events, here are Gardenia’s official sites: