I think it’s the start of the rainy season because it has rained almost every afternoon this week. And when it’s raining, syempre masarap kumain ng may sabaw like this BEEF RIBS POCHERO.

Good thing alls well that ends well, that “Chorizo de Bilbao” was bought and this Pochero was cooked.

Do you know that Pochero is traditionally served with an Eggplant Sauce? The eggplant is mashed and mixed with vinegar, salt, and pepper. I don’t know why but it goes so well with this rich, tomatoe-y, flavorsome dish!

Some find this unusual,though and still makes a patis-siling labuyo sawsawan.

How about you? Which one do you prefer? 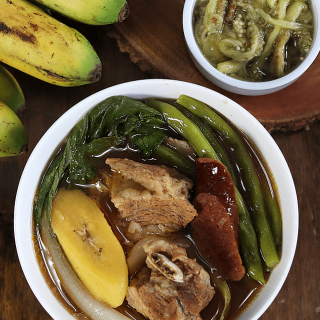