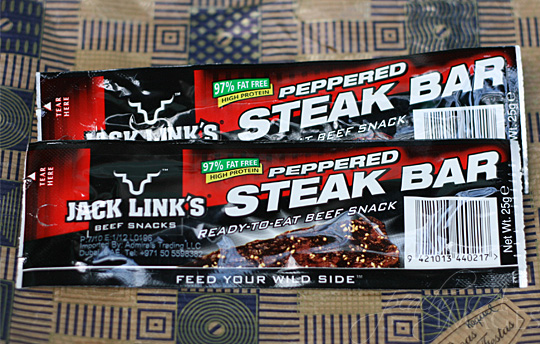 This Jerky came from peanutbutter♥..

No, my peanutbutter♥ is not a jerk..

I said, let’s talk about Jerky..

Jerky is meat that is trimmed of any fat and cut into strips. It is marinated in a well-seasoned rub or liquid and then dried or smoked producing a chewy snack which can be eaten immediately or stored for months without refrigeration.

I think Jack Link’s Peppered Steak Bar is one of those products who would like to pass himself as jerky but  in reality, it consists of highly processed, chopped and formed meat, rather than traditional sliced, whole muscle meat. It actually reminds me of a really dried and aged Longanisa {local sausage}.

Jerky is man-food. I think eating Jerky is a lot like getting a shot of depo testosterone. It makes a man more manly. 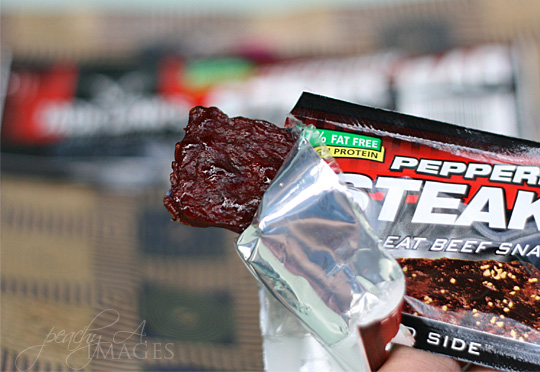 Don’t get me wrong. I love eating meat and steak..only, I don’t like ’em super dry.

Anyway,  as I’ve said earlier, this reminds me of an über dry longanisa and aside from the high amount of sodium content this could pass as snack alternative. It contains high amount of protein and is packed in an east to open foil pack. It tastes quite good for a meat stick too. I’m sure this would be a great hiking snack..

But I still prefer My TRAIL MIX..♥