You are here: Home / hotels / Dreamy Summer Desserts at Solaire Resort and Casino

Solaire is one of the resort hotels that I’ve listed in my checklist as one of those I’d like to have a staycation in this year.  I am in awe whenever I browse the net for images of its incredibly well-appointed accommodations and the swimming pool…. oh that gorgeous swimming pool! I’m so looking forward to spending one of my best sunsets there with my family.

Along with relaxation and pampering  is, of course, the experience I am mostly looking forward to — a world-class dining experience at one (or more) of their signature, casual or quick serve restaurants.

Last week, I was given the chance to take a peek inside and have a taste of the latest summer desserts at Solaire made by the world-renowed chefs in three of their first-class dining establishments.  (It was supposed to be five but I had to leave because I had an appointment later that afternoon…*sob*) 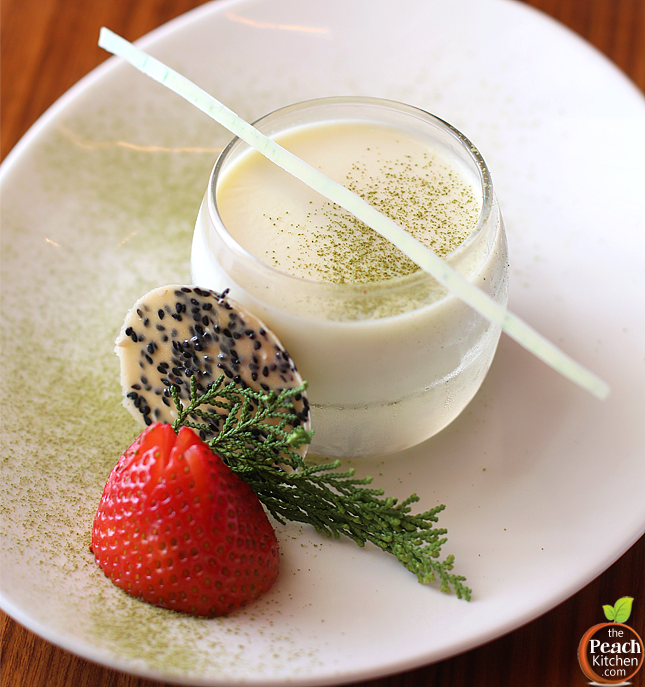 Hearing the name Wasabi Panna Cotta (₱360) was enough to pique my curiosity. It’s the first time I’ve heard of Wasabi being incorporated into something as sweet as dessert. My immediate thought is that it is something along side the chili chocolate that’s been quite a hit with chocolate-lovers out there. 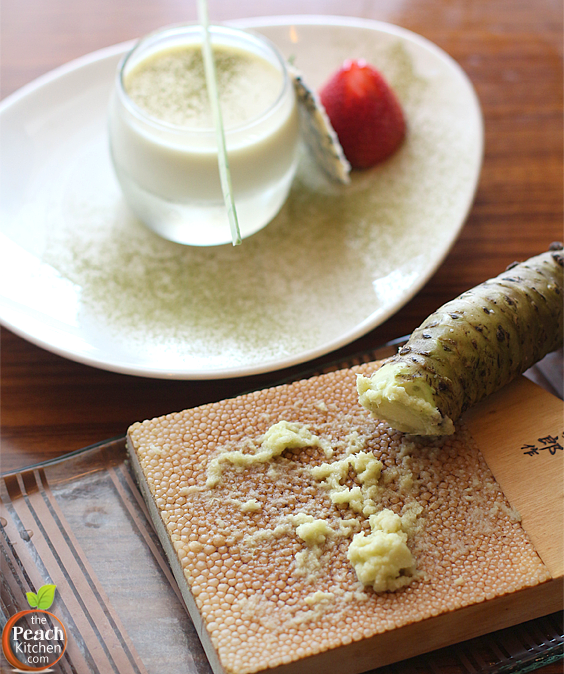 Just like the traditional panna cotta, this is also made with milk, sugar, cream, gelatin, and Wasabi in its natural form, grated and then mixed in. What was nice with the Wasabi Panna Cotta is that it has the perfect balance of sweetness, zing, and that velvety-smooth texture. It is served with slivers of white chocolate filled with black sesame seeds and a strawberry on the side, just in case you need some tartness to break the sugar. Then there’s a dust of matcha powder that reminds you of it’s japanese origin while eating.

I’ve tried panna cottas that are more gelatinous and chewy when you bite into it. This is not that, it is creamy, melt-in-your-mouth, and has a play of flavor that will keep your tastebuds guessing on what it will come up next. Can you tell how much I’m loving this dessert? 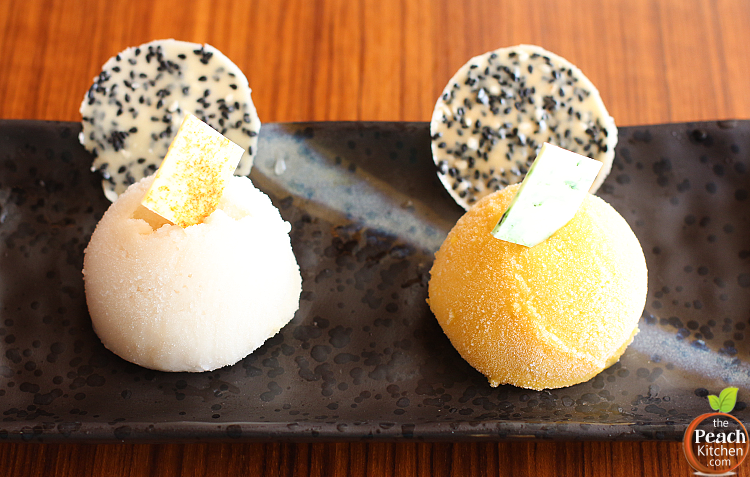 Next up is the Mango and Guyabano Ice Cream (₱360) which are more of a sorbet than an ice cream. It is something you’d want after you’ve been out in the pool all morning or if you just want something refreshing to cool you down amidst the summer heat. 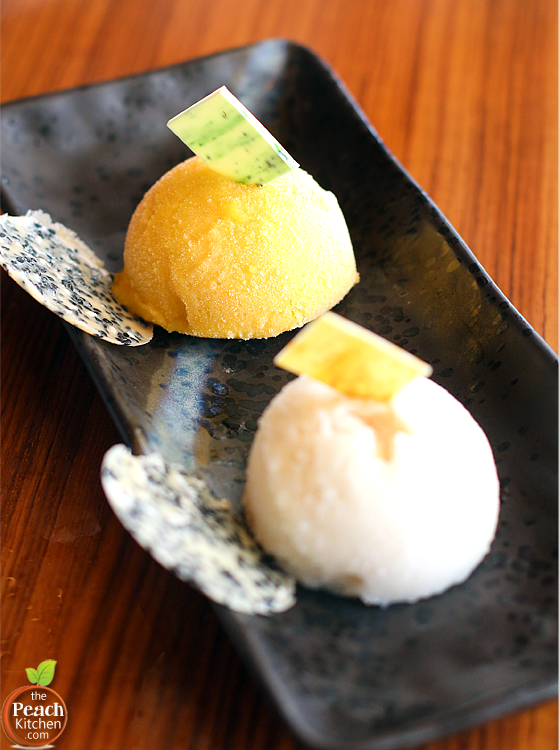 This gives highlight to the sweet Philippine Mango and a flavor of ice cream you won’t normally find at any ice cream store: Guyabano (Soursop). It’s refreshing in the sense that you won’t taste anything else except frozen fruit and maybe a bit of sugar if you tried a spoonful. It doesn’t taste artificial, it’s dense and thick,  and  it’s not airy — something I always look for when eating sorbet. Biting into the slivers of white chocolate filled with black sesame seeds served on the side is just the perfect way to cap off this dessert. 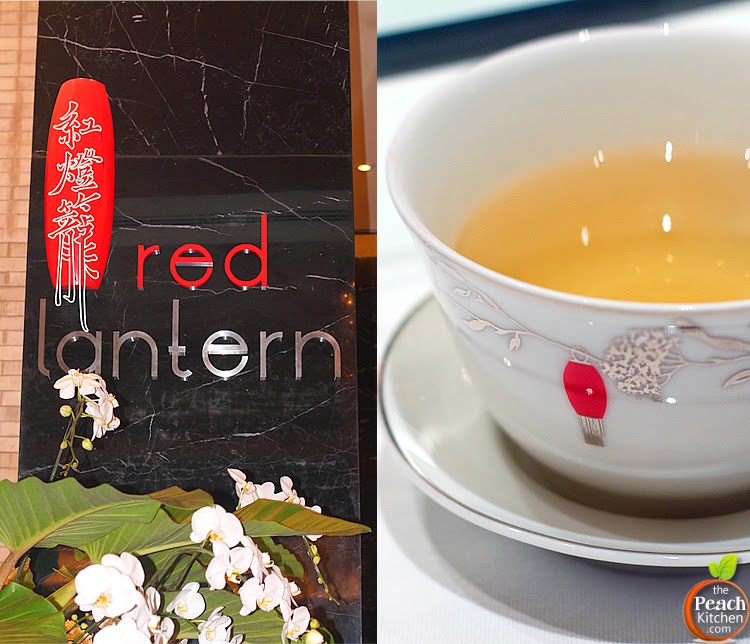 Red Lantern is the signature Chinese restaurant of Solaire. It’s door opens up into a red carpet entrance that would make you feel elegant as the surroundings. We were welcomed there with a cup of Tie Guan Yin, their light and floral house tea. 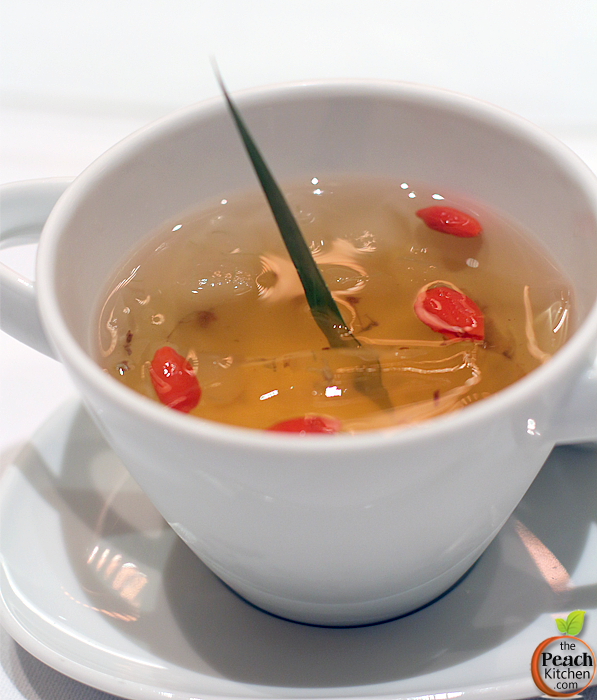 After sipping on the hot tea, we were served this soup-like dessert called Chilled Osmanthus Flower and Wolfberries with Aloe Vera (₱200). It is Osmanthus flower-infused jelly, aloe vera bits, and wolfberries cooked in a sweet soup with bits of dried osmanthus flowers.

The fragrance of this dessert makes it unique; I’ve never encountered a floral dessert before. With the many health benefits you can get from it, I’m sure that this is something my mother will like. 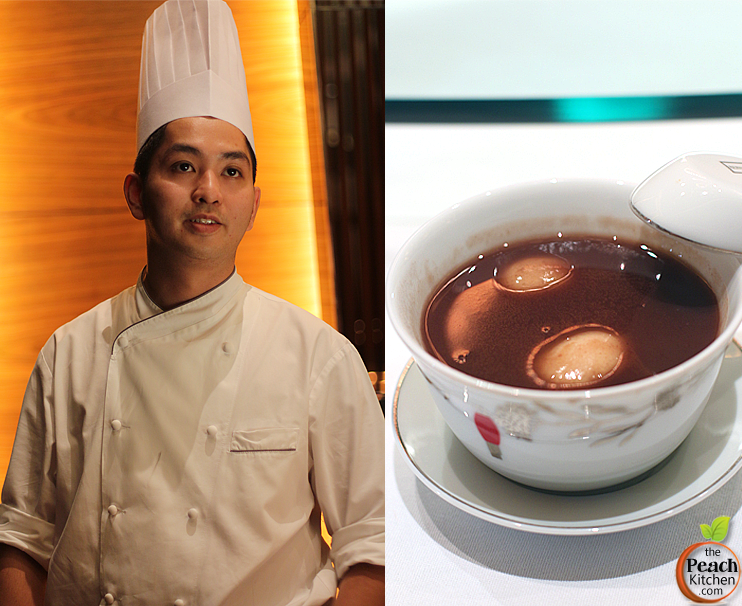 This is the creation of Chef Lo ka Cheung Sam, the executive chef of Red Lantern. Chef Lo is not so fluent in English but he has a mastery of traditional Cantonese cuisine. With the help of the restaurant manager, he tried to explain what inspired him to create these wonderful desserts.

The Glutinous Rice Balls with Red Bean Cream (₱200) is inspired by the traditional Chinese weddings that’s why there are two large pieces inside the small bowl. In Chinese wedding tradition, round rice balls symbolize a complete and sweet marriage. 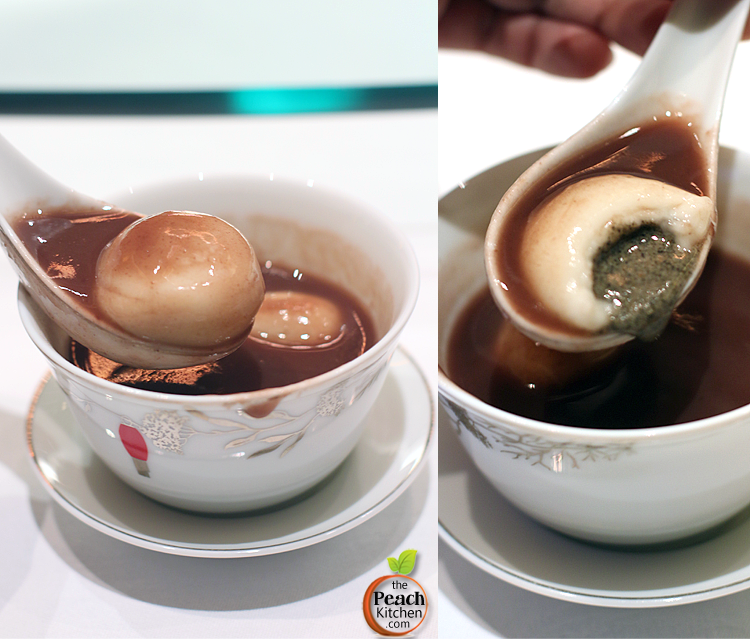 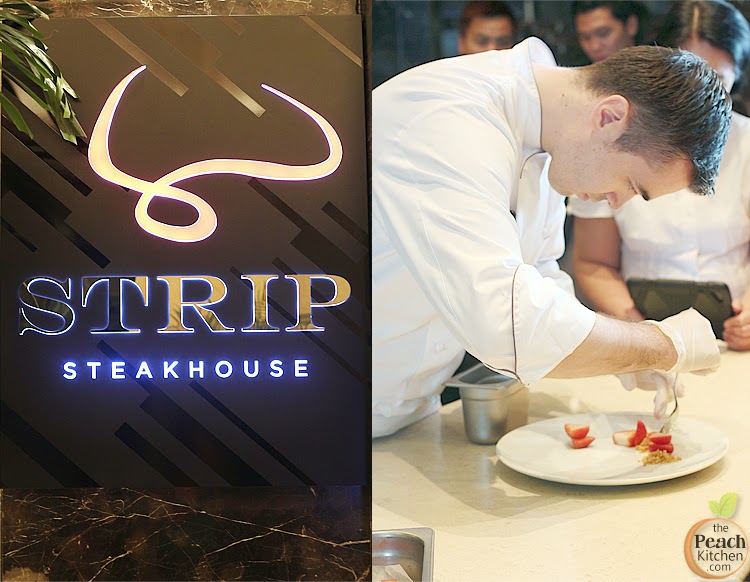 Strip is the well-known steakhouse of Solaire. Chef Eric Turgeon is the Sous Chef there. He showed us how to assemble the new desserts offered by Strip. 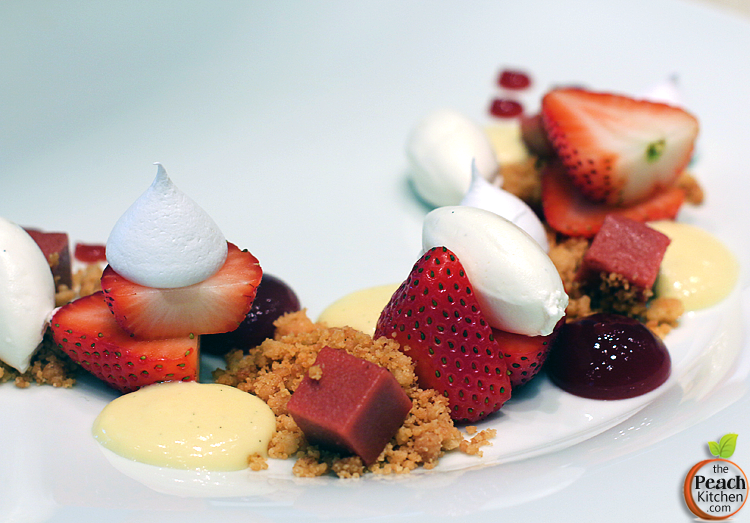 The first he made was the Strawberries and Cream (₱420). It’s a fabulous version of the traditional strawberries and cream that we’re used to. This is made up of large imported fresh strawberries, strawberry jelly (the pink cube you see right there), shortbread crumble, dry meringue, and luxury cream Chantilly. 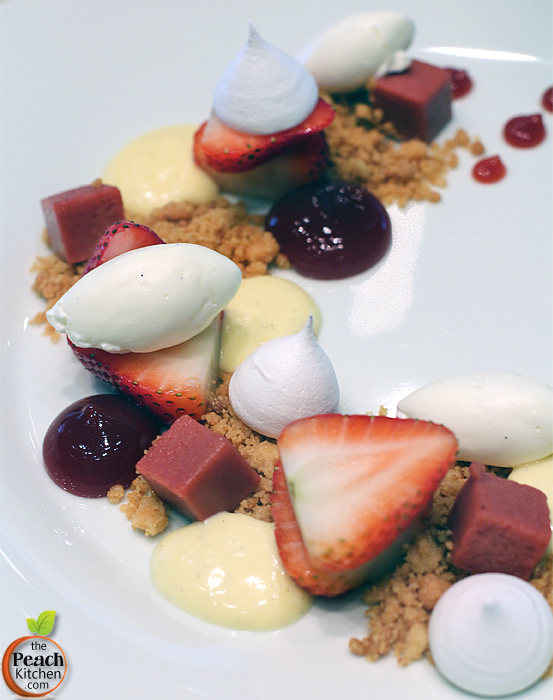 I love the freshness and how elegantly this dessert is presented. Luscious cream, fresh strawberries, crumbled shortbread — prepared to your liking. What’s not to love about this dessert? 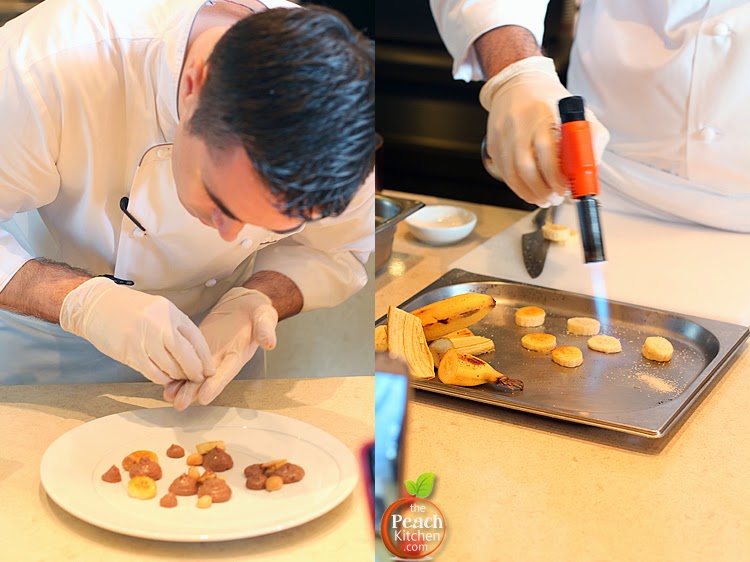 When I read that the second dessert is to be Dark Chocolate Mousse (₱420), I didn’t think that the preparartion would be so elaborate and that many flavors and textures were going to be involved.

A banana was sliced and torched to caramelized, there was caramel sand, roasted macadamia nuts, macadamia milk foam, and light and airy chocolate mousse. 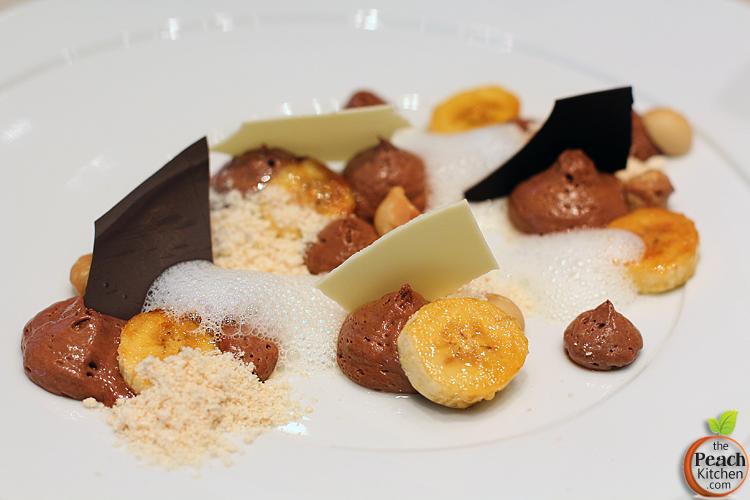 The Dark Chocolate Mousse was light and airy but it was thick at the same time. You can tell it’s made from high quality dark chocolate because it was smooth and has a bittersweet satiny finish.

Along with the caramel sand, caramelized banana, and the macadamia milk foam– the melody of flavors is surprisingly pleasing and leaves you wanting for more. 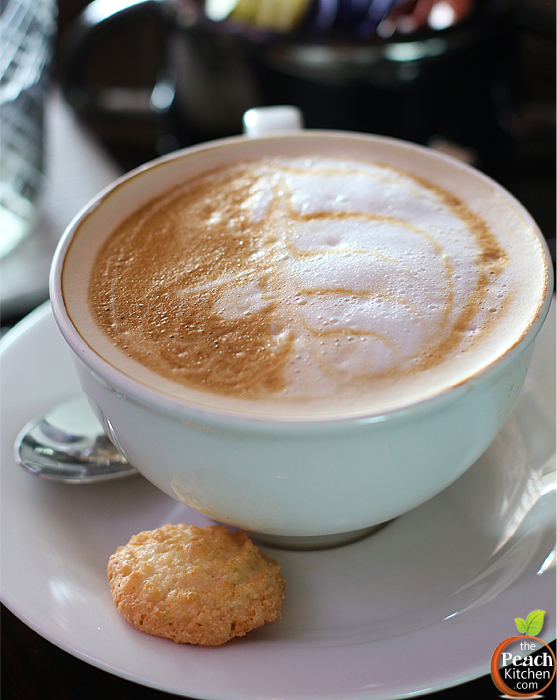 Too bad I had to leave after the third restaurant.  I promise  to be back and try the desserts at Finestra and Fresh.

And maybe get myself a second helping of this Dark Chocolate Mousse….