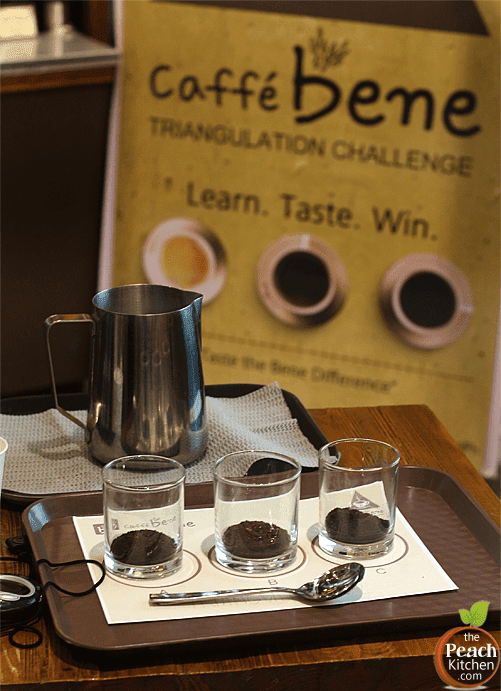 Rediscovering coffee shops that had been around and discovering new ones always makes us coffee lovers excited. After all coffee is an exciting drink and you can drink it in so many ways all through out the days. So when Caffé Bene invited me for a Triangulation Challenge, I said yes eventhough I was wondering what do I have to do in that challenge.

It’s my first time at Caffe Bene and it’s also the first time I’ve heard of this coffee shop. Founded by Mr. Kim Sun-Kwon, Caffe Bene has grown far and wide in Korea. The Bene in Caffe Bene is pronounced as Be-ne, as in benevolent, and it means well or good. 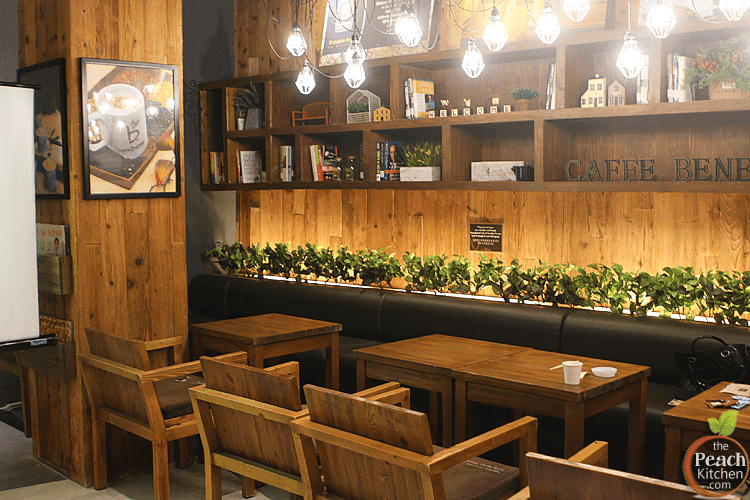 I arrived at their branch in Eastwood Citywalk 2 and instantly warmed up. It was under renovation but inside was this homey European ambience that’s accentuated by Korean touches. It was exuding  a friendly, warm, and cozy vibe. 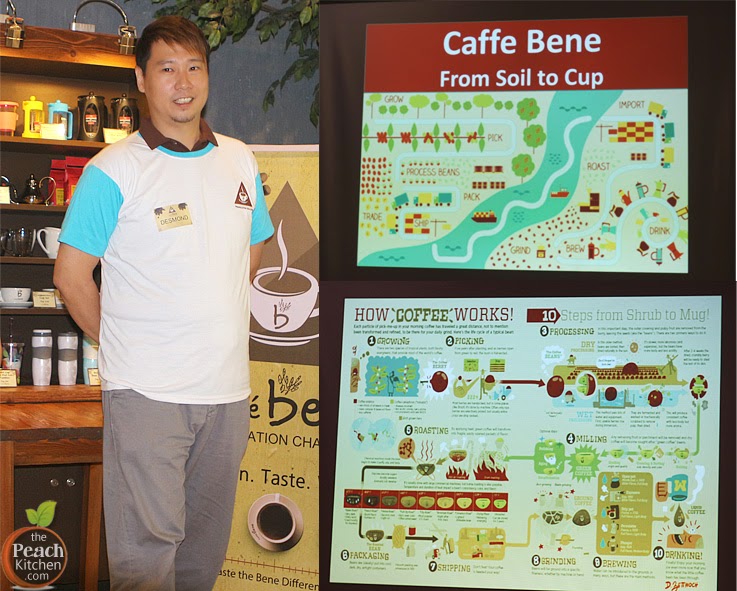 The owner, Mr. Desmond Chua hosted the event and together with his staff explained to us everything there is to know about coffee and Caffe Bene’s coffees. 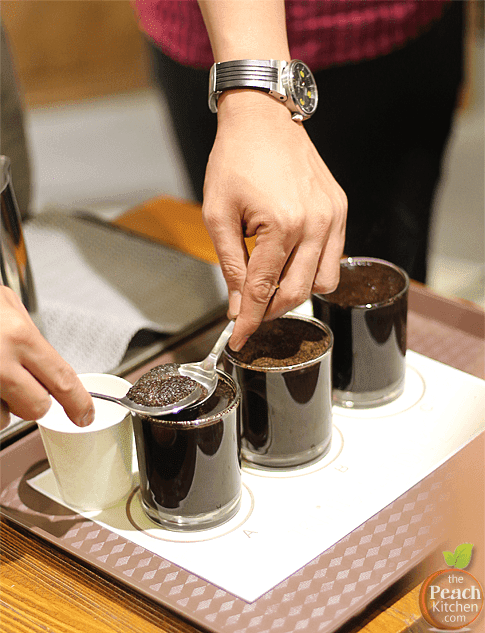 We were taught how to do cupping. Cupping is the specialty coffee industry’s standard for coffee evaluation. It is a method in which individual cups of coffee are prepared according to established guidelines for the purpose of assessing the aroma, taste, texture of a sample coffee.

Hot water was poured into three cups with ground coffee. After four minutes, the grounds has risen on top of the glass and you have to “break” it with a spoon and then remove those grounds until there’s nothing left. After that, you can now taste the coffee. 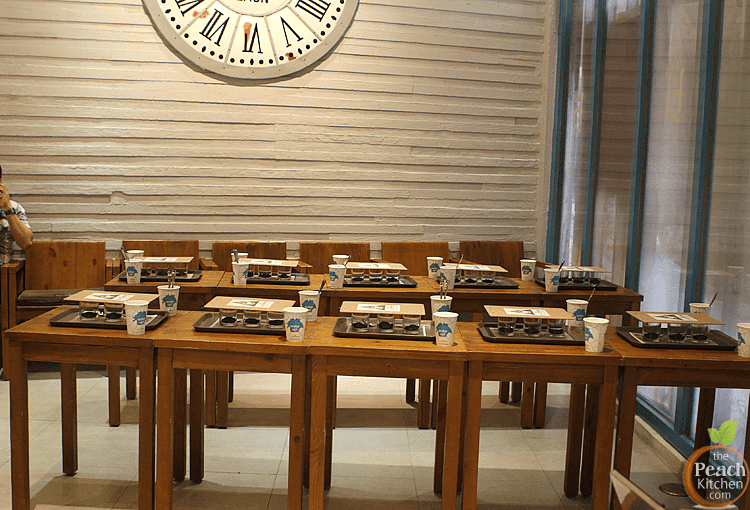 Apparently that’s what we have to do for the Triangulation Challenge. We had to try out ten 3-cup combinations and tell which is Caffe Bene Blend. It was fun and exciting at the same time. I think it was on my fifth set when all the coffee began tasting the same..waaaahhhh. I think my tongue became numb with the taste of coffee. I only got 3 out of 10..LOL! 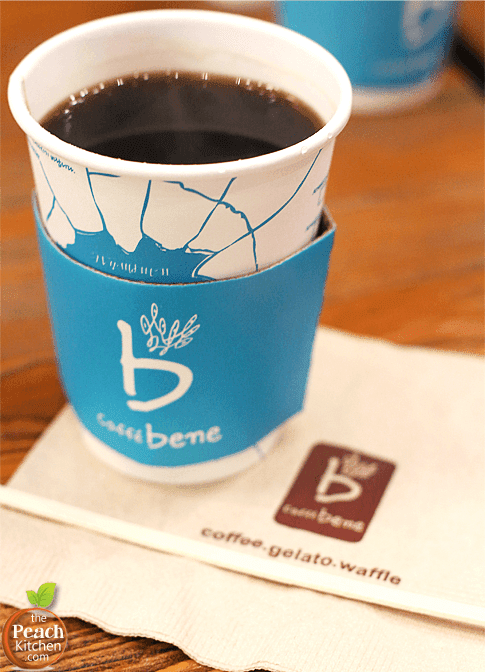 We were given Caffe Bene’s rich medium roast Americano . It was served with sugar and creamer on the side but I drank the coffee without any of it to find out its true taste . There’s a mild almost caramelly sweetness to it, a chocolatey aroma, and hints of fruits. I decided to let go of the condiments altogether and drink it straight up. Even when it turned cold, the coffee,s flavor profile remained the same.

Caffé Bene’s secret in getting the most flavor out of their coffee is how they roast it. All their coffees are Medium Roast – that’s what makes them different from most coffee shops. Unlike the strong bitter taste of dark roast coffee, medium roast coffee is non-bitter and you’ll need less additives like sugar. That’s the “Bene Difference“. 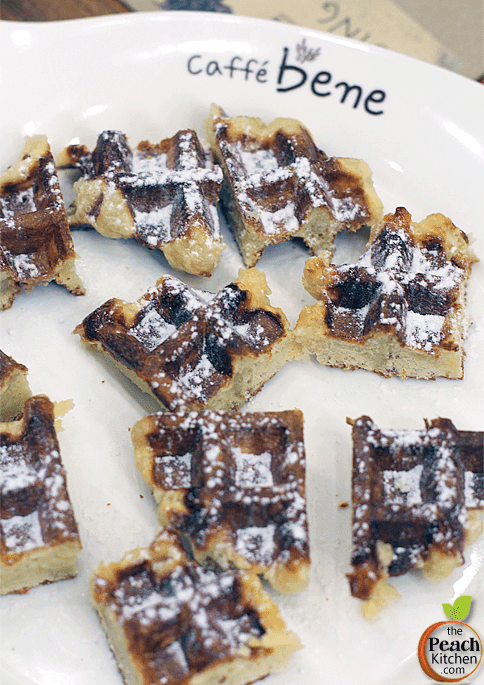 Their Liège Waffle is only made upon order to ensure that customers get the exact same fresh waffles as served in the city of Liège, Belgium. It’s soft, a bit sweet and has some crunchy parts. 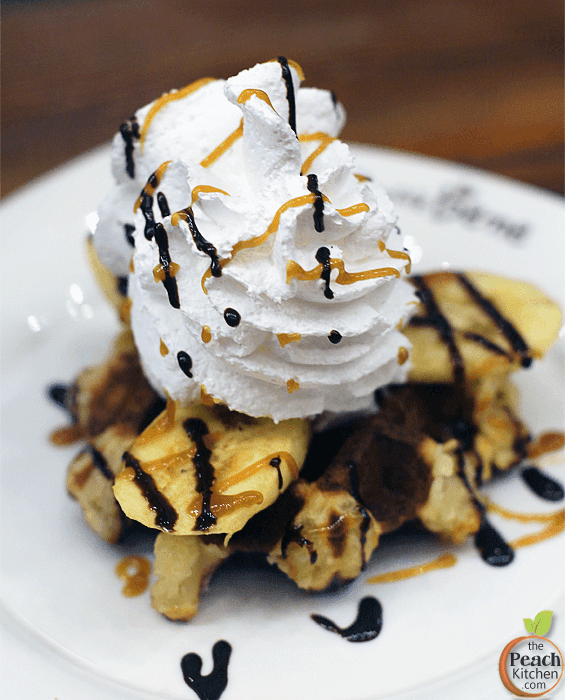 You can also order it with different kinds of toppings like this Caramel Banana Liège Waffle which is topped with banana slices, whipped cream, chocolate and caramel sauce.

Below are the Honey Bread and Cakes: 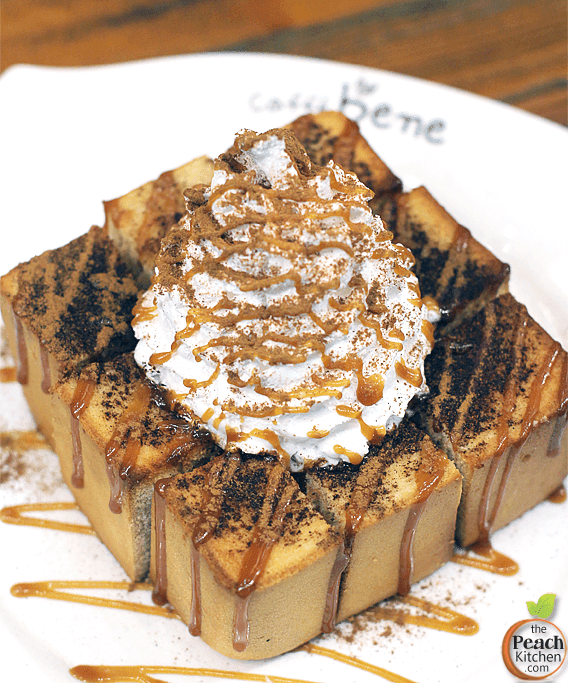 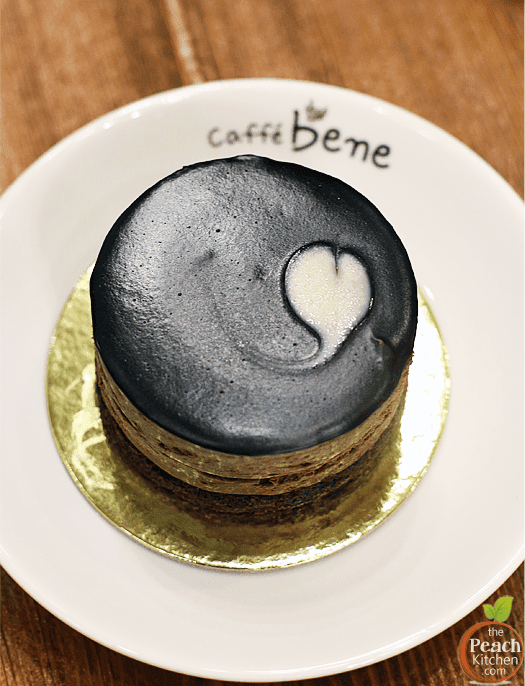 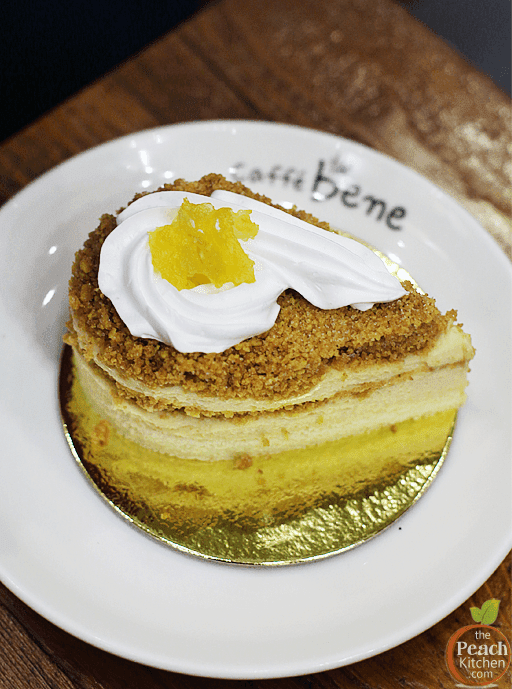 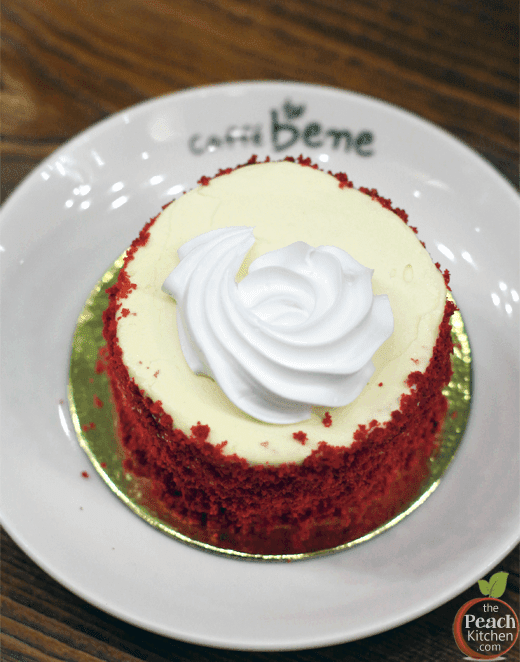 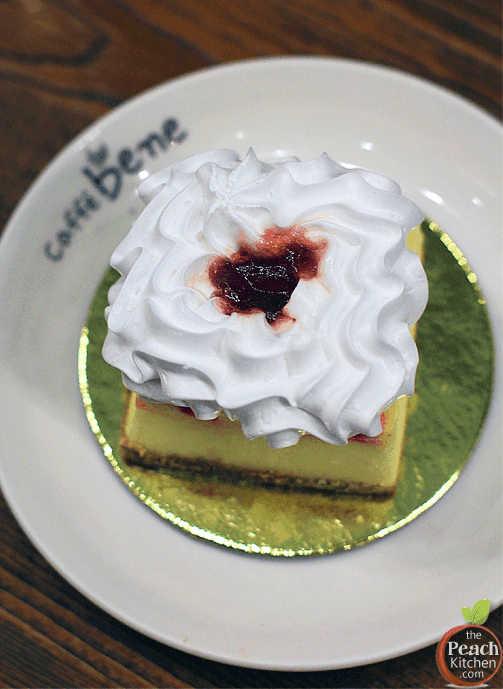 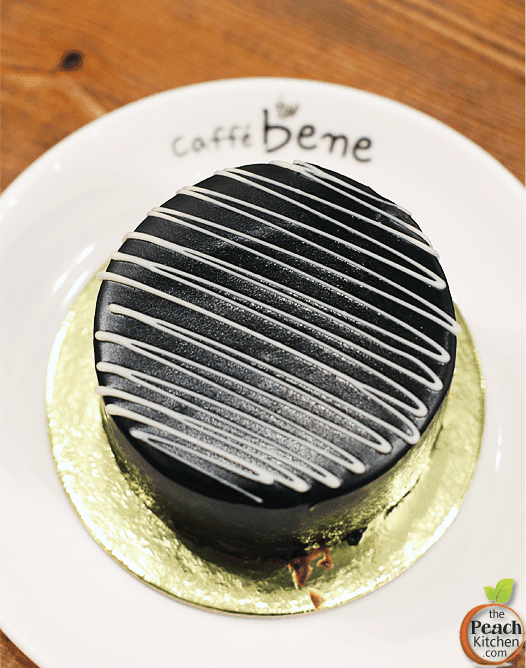 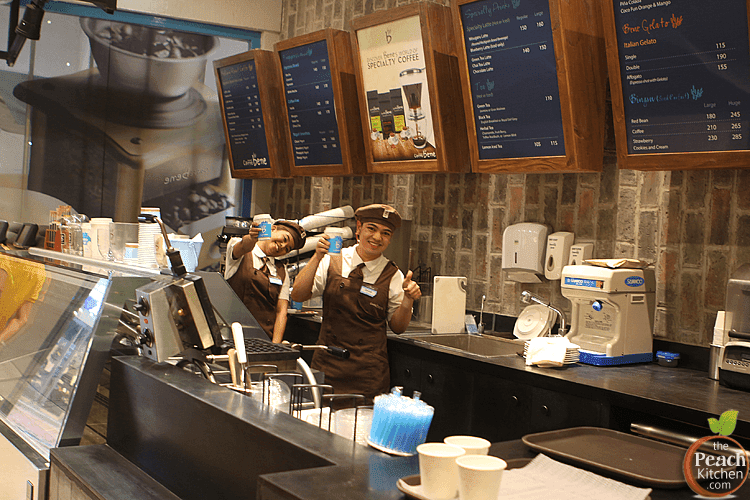 To top it all off, Caffe Bene has friendly baristas!

I would like to try the other coffees from Caffe Bene like their lattes and mochas. I’d love to give their other food offerings a try as well so I’ll definitely be back. I might have to try a much nearer branch, though.