You are here: Home / hotels / CRU Steakhouse at Marriott Manila 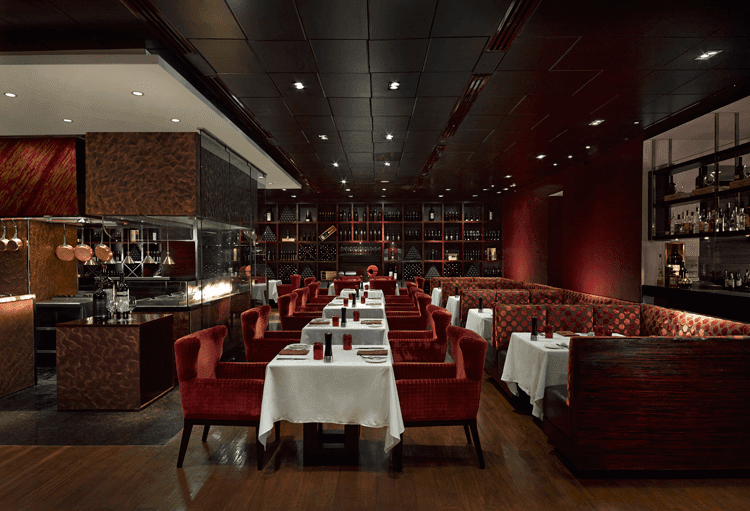 When I received an invite to dine at Cru Steakhouse at the Marriott Hotel, I got giddy and excited. I’ve read a lot of amazing reviews about Cru and the warm hospitality that they extend to their guests. It’s something I wanted to experience for myself.

I was 8 ½ months pregnant at the time and  been staying home a lot to get enough rest (as per my OB’s advise). I had to decline many invites specially to places that would require more than an hour of travel time. Cru Steakhouse was an exception specially because of the perfect timing of the invite — we were celebrating our 8th anniversary! 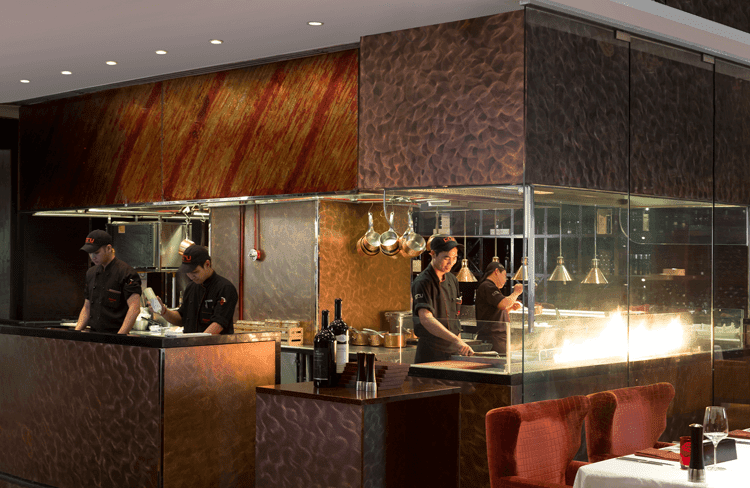 peanutbutter♥, Ykaie, and I braved the Metro Manila traffic on the way there. We were a bit late with the reservation but the moment I stepped into the restaurant and the staff greeted us at the doorway,  I instantly felt relaxed and comfortable. Cru exudes modern elegance and sophistication but warmth can be felt at the same time.

I can’t help but fall in love with the dark wood paneled interior, the plush seats, and that open kitchen right at the heart of the dining area. 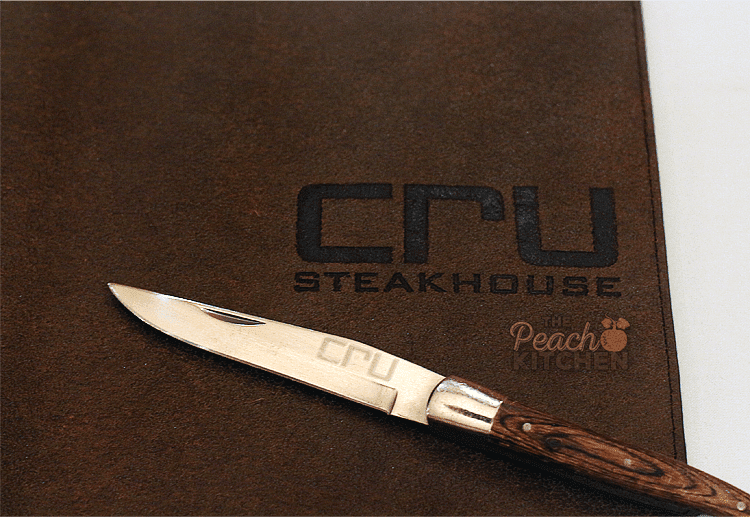 Even though we are only a family of three, we were led into a private function room that could seat up to 10 people. I believe this room has to be booked a week ahead.

We were handed this leather bound menu and it took us a long time before we could order. All the items listed sounded good! The servers were very knowledgeable about each of the food items from the menu and were very kind to answer all our questions. 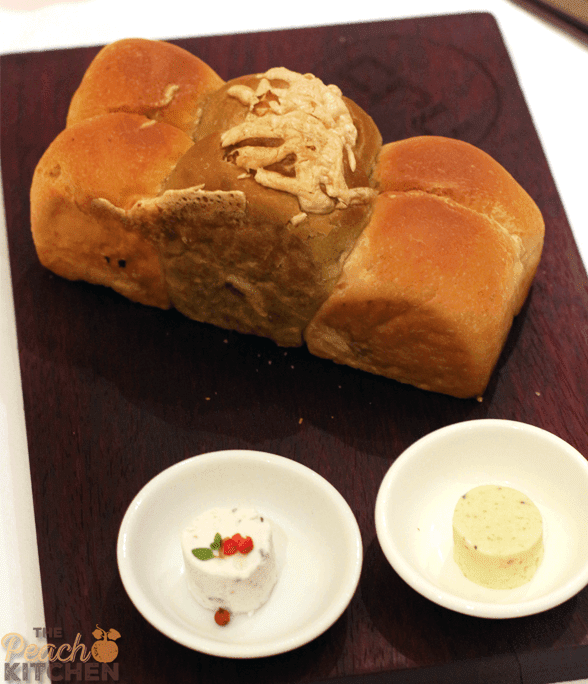 While waiting for our orders, we were given this trio of CRU’s homemade bread. I believe the flavors were Parmesan, Pesto, and Tomato served with pesto butter and goat Ccheese garnished with red peppercorns. The bread were warm and soft — just how I like it. Ykaie loved the pesto butter while I feasted on the goat cheese. 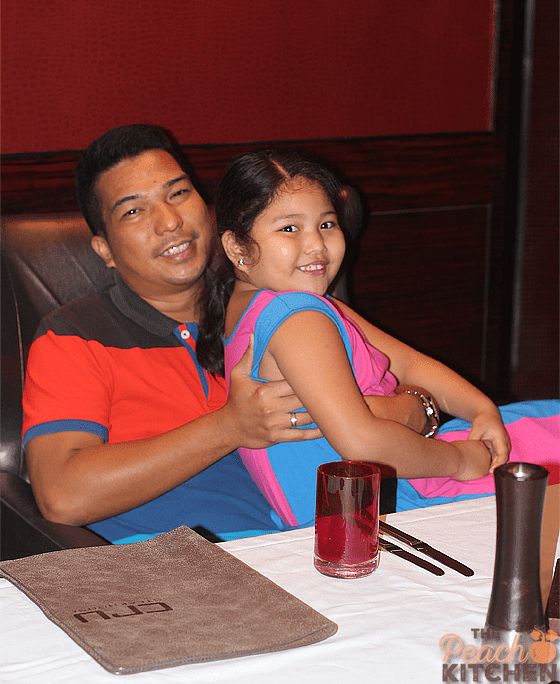 peanutbutter♥ and Ykaie were having a daddy-and-daughter moment while we were waiting for the rest of  our meal. Meanwhile, the server couldn’t be more attentive to our needs. They always make sure our glasses were filled with cold water and asks if we need anything. 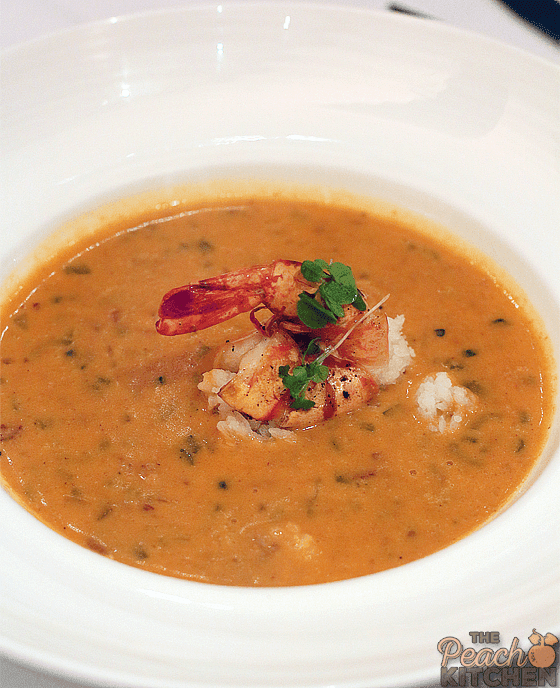 The first to arrive was the Shrimp Gumbo (₱370) which they were kind enough to split into two. The soup was mildly spicy and the broth was thick but not overly rich nor creamy. There ware bits of fragrant rice and vegetables hidden underneath the shrimp which came as a nice surprise just like a treasure found under that brimming flavor of the sea. 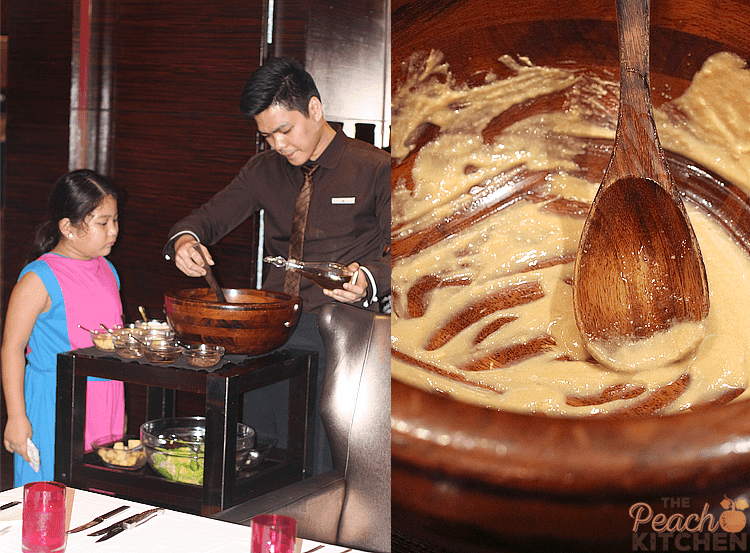 The CRU Caesar Salad (₱530) came with a jolly server who prepared the caesar dressing table-side much to Ykaie’s delight. She watched with curiosity as the dressing was combined into perfection and the salad was tossed well. 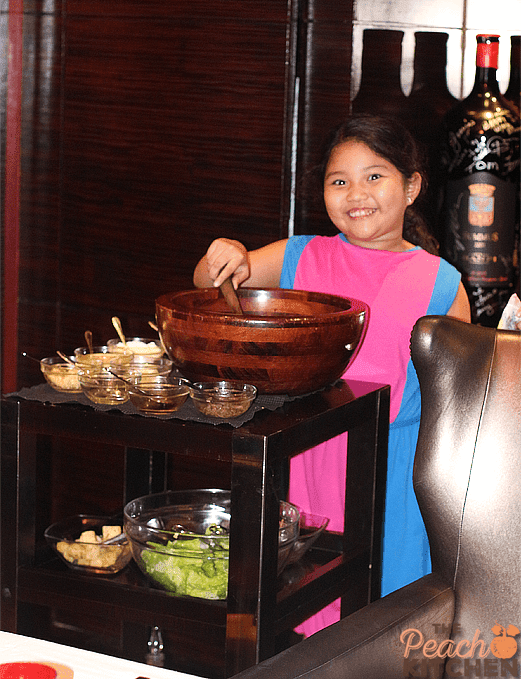 She even posed as if mixing the salad dressing herself…. 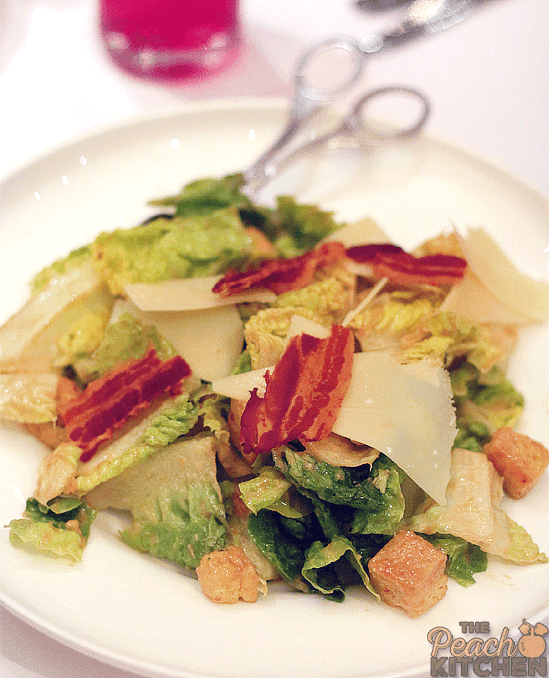 CRU’s Caesar Salad was composed of fresh romaines, crisp pancetta bacon, garlic herb crouton, and shaved parmesan just how I like my caesar salad to be. 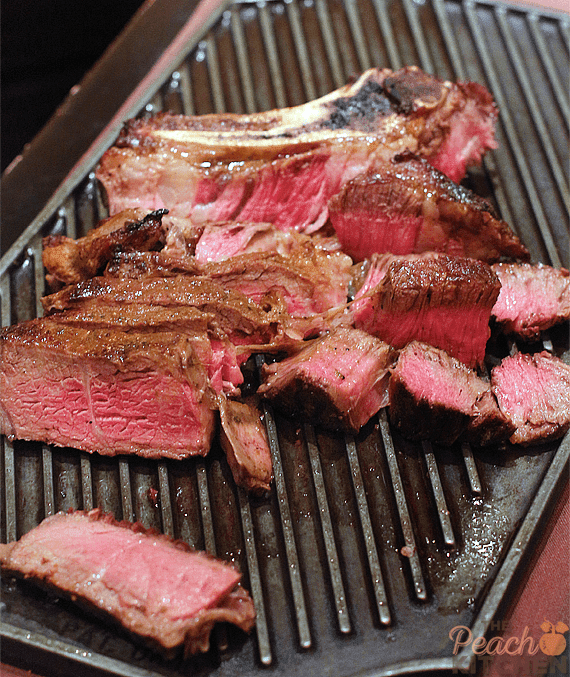 Finally, the most raved about steak came: CRU’s US Certified Angus 900g Beef Prime Rib Steak (₱5,400). This 900-gram steak is carved table side and  comes with your choice of two sauces and five sides. They said this was good enough for two but it could satisfy a group of 4-5 people specially since it came with five sides.

I can’t forget how well-browned it was outside, charred a bit along the edges of the fat, then pink and juicy inside. 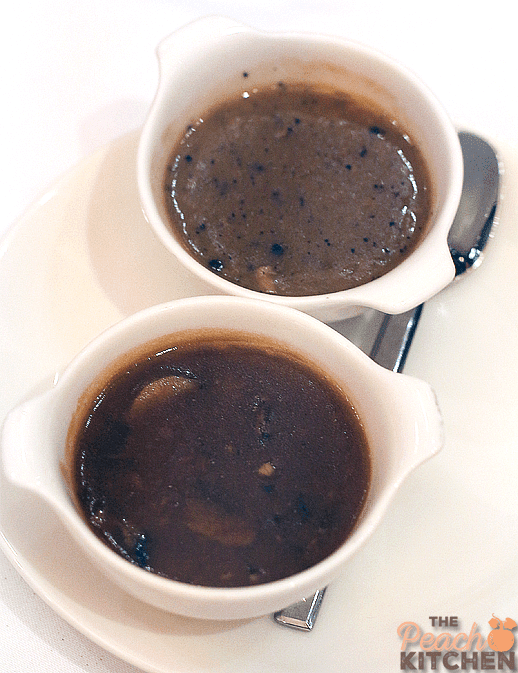 There are six sauces to choose from: Black Peppercorn, Forest Mushroom, Béarnaise, Shiraz, Spicy Tomato and Onion, and Blue Cheese Sauce. All of which, as I imagine, would be perfect to dip your steak into but we chose the first two. 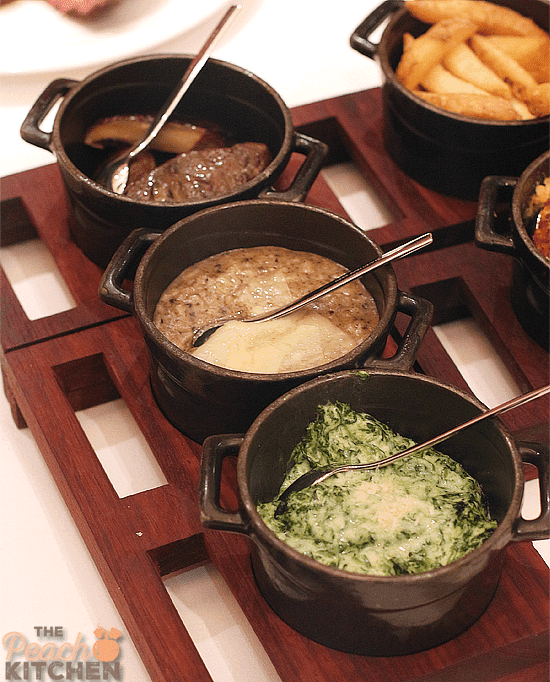 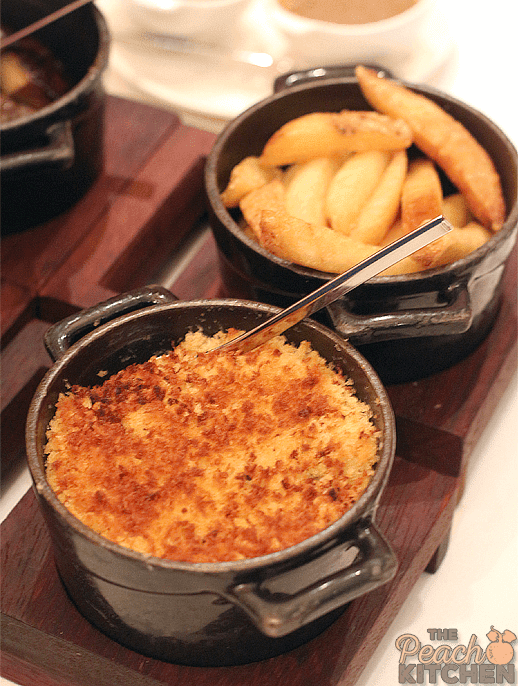 I chose the Steak Fries for Ykaie ’cause I know how much she loves potatoes while the other four are for peanutbutter♥ and I to share.

I love truffle and if there’s one thing I could sprinkle or drop into everything –it’s truffle. That would explain the Black Truffle Rissotto and the Truffle Mac’ N’ Cheese. These sides are rich, creamy…and..and impeccable. Creamy, flavorful, and still has a crisp bite at the end, the Creamed Spinach is my poor excuse to eat vegetable in this lovely, oh-so-delicious, night.

The Grilled Portobello easily became a favorite. The smoky flavor and the firm bite was addicting, it was actually the one that we finished first. 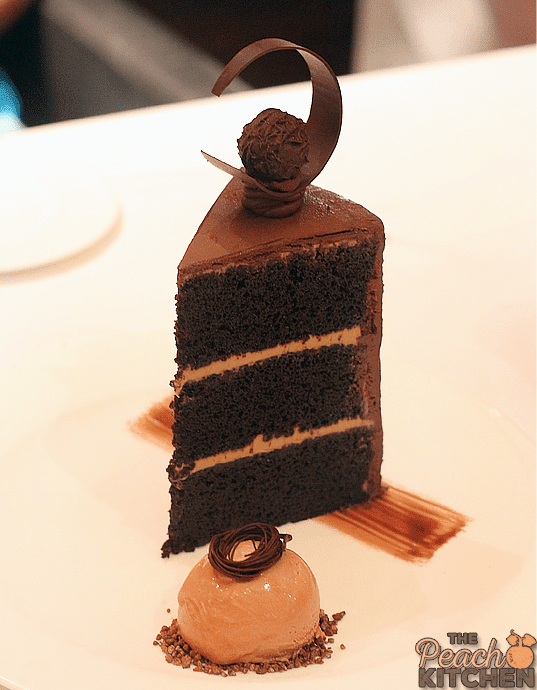 The perfect way to end our meal were these two desserts. Sweet and Salty Chocolate Moist Cake (₱400) which came with a dark chocolate ice cream on the side. I was surprised to see a 6-inch cake that was too tall for me to finish and yet too heavenly for me not to. I am so glad I was sharing it with the two most chocolate-loving people I know Or I would’ve finished it myself. Oh, I was sharing it with the other one in my tummy, I almost forgot. 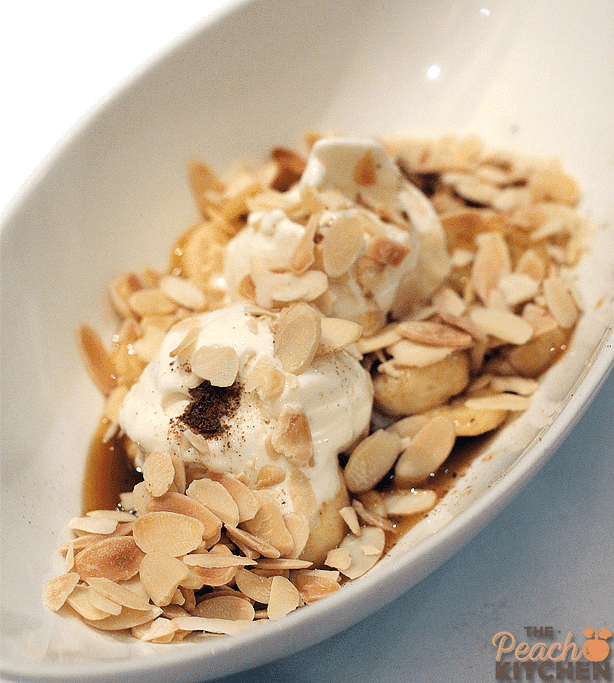 The other one was this Bananas Foster (₱410) which was a table-side performance as a flambé as well. Ykaie was amazed as the caramelized bananas burst into flame, then later poured into vanilla ice cream, and then sprinkled with sliced almonds. She will never look at a banana the same way again.

This has been one the best anniversary dinners we had to date. I love the romantic ambience at Cru Steakhouse. What can I say? Everything was perfect for me. Thank you so much to AIMEE LAGMAN, Assistant Marketing Communications Manager for inviting us and letting us experience the top notch food, service, and hospitality that is Cru Steakhouse.