It’s been raining for more than a week now. It’s windy. It’s cold. It’s damp. The mood’s gloomy. To warm up our tummies and put smiles on my family’s faces — I cooked them one of our favorite soups — Baked Potato Soup.

This is one of our go to soup during rainy days aside from the usual Sopas. It’s also Ykaie’s favorite soup among all the soups I make for them. Kasi naman, it’s very rich, creamy, at lasa talagang baked potato in each and every bite — very comforting.

I know it has a lot of ingredients but I’m telling you — it’s worth it. And if you’re a soup person, you will absolutely love this. 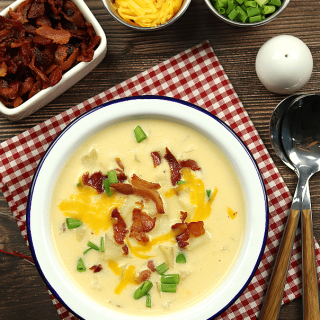